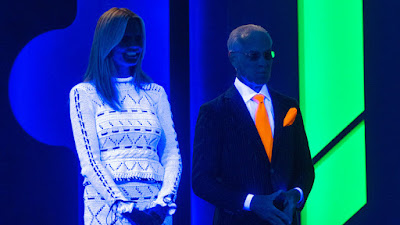 One unconventional materials challenge, one ready-to-wear for the "everyday woman" (though they
didn't use such a woman to judge or model said challenge), and now a gimmick challenge. What do you think PR is doing this season? It's not being different on a foundational level, but it does seem to be doing it's typical things in an odd order. And if I read the preview for next week correctly, we're already at Heidi's challenge? And with 13 contestants left? That might not be as off the mark as it sounds, but it certainly feels odd. Not to mention the fact that we won't have had a group challenge through four episodes. If PR is attempting to spice things up by throwing challenges at us in a different order than we're used to, I might commend them for it.

On the one hand, it's a quick and easy way to change the show without actually changing anything. But on the other hand, part of the fun of some of these challenges is that they tend to come when the competition has been whittled down to people strong enough to make the best of them.

For an example of this, let's look back to the type of challenge that this one most closely resembles: The Rainway from two seasons ago. That was episode eight and featured nine contestants. It was quite a spectacle. Not every look was great, but the stand outs from the episode (Sean and Kini's looks) were show stoppers.

I'm writing this review two days after having watched the episode (sorry, I've been busy lately), and I'm struggling to remember a single look from this week. Was anything on this episode really show stopping? Or maybe I've gotten a bit ahead of myself. Let's go back.

Tim and Heidi come out and have fun with the blacklight. Heidi explains that this challenge is about creating a day-night look that looks as good in runway lighting as it does under a blacklight. It sounds, by her explanation, that the looks should be ready-to-wear and transitional. But there's a point at which she says that the look should be runway ready. So are they making high fashion, or real clothes? It's not very clear to me at least, but what do I know?

Back in the workroom, there's a tenuous connection made to Lenscrafter's Transitions Lens, but it doesn't really work. Which isn't surprising since most of the show's weak product placement of late hasn't been as smooth and effortless as the show would like to think.

The contestants sketch and head off to mood with a little blacklight flashlight, but it's all pretty standard. Except for the absence of Swatch. We haven't seen him since the first episode, and I'm guessing that his old age is probably keeping him home more often lately. At least, I hope that's all it is.

Tim's visit isn't really special either. He flat out calls Kimber's look ugly, which is a funny change of pace from his typically tactful approach. He looks at Dexter's fringe look and points out that he needs to go farther with it. It's surprising to me that he doesn't say the same to Alex who's big idea is to make a basic dress that just kind of changes color under the blacklight.

Meanwhile, Mah-Jing is obsessed with thinking about his fiancé's future wedding dress. As a result, he makes this ill-formed, misshapen, poorly-constructed white dress that Tim rips apart. It's not a make it work moment so much as a burn it down and rebuild from the ashes moment.

Starting all over again becomes something of a motif in this episode. Jenni also has problems with her look that causes her to go back to the drawing board a couple times. By the end of the day, a lot of people have looks that are totally different from what they started with. On a one day challenge, that can always be risky.

Cornelius: I hate it. In the day light, it’s a boring ass white dress with nothing special about it at all. In the blacklight, I think it looks childish and haphazard.

Jenni: This is another one that didn’t do anything for the daylight portion of the look. It looks like unflattering underwear and a clear rain coat. I want to commend her hand painting of the flowers, but no one wants to wear this.

Alex: Alex nails it on the head when he points out how bored he is with the transition. I knew this when he was talking about his look in the workroom: the pink simply changing to orange isn’t enough of a change to really wow anyone. However, his dress is pretty and fashionable, so I’ll give him that much. He’s probably going to be safe, but he didn’t embody the challenge well.

Mah-Jing: He seems to think that the mistake was in the pink paint leaving those streaks on the daylight look, but my question is what would the dress have looked like even without that mishap? It’s sad and boring in day, and messy at night. And the braided cord thing he did added nothing to the overall look.

Nathalia: I think this is beautiful, but I do not agree with her assessment that it turns into a totally different garment in the blacklight. When the model unzips it, I love it a bit more, but I think the same thing about her transformation as I did about Alex’s.

Roberi: There’s something weird and freaky about this dress that I love. It’s got a kind of Jim Hensen feel to it, but it works. It also looks like something that you wouldn’t expect to transform nearly as much as it does, so when the blacklight comes on, you’re pleasantly surprised. This might be the first look of the night that works in both forms of light.

Kimber: I’m going to say no, but it’s a soft no. I think she 100% chose the wrong fabric, and I don’t think her painting on it to make it pop in the blacklight did her as many favors as she hoped it might, but I don’t think the dress itself is horrible. The pattern is, but the dress made out of that pattern is OK.

Sarah: Did she actually change the collar at all? It doesn’t seem like it. I can appreciate the transition. On the skirt in particular, I think it takes something that seems a little boring and makes it a lot less so. But I doubt anyone’s jumping up and down for this look.

Rik: I like this, I really do, but I also fully recognize that there's a serious taste level problem with it. I don’t think anyone would want to wear it out in the daylight because where are you going dressed like that other than to a club? But as club wear, I think it works.

Tasha: When I saw it in the workroom, I was hoping she was going to do something different with the top. Maybe some cut outs on the front or something. Because as is, it looks unflattering. But I love the skirt and I like the back of the top a lot. So that makes up for a lot of it, but this isn’t winning any awards.

Erin: I certainly think she did a good job of embodying the challenge, but I’m not in love with this look. She can do better, and I think we all know it. It’s just a bit boring. But I do think it looks like two different looks in the two different lights.

Brik: Get the fuck out! I’m so done with him.

Dexter: Ok, not great, but ok. I wish he had done something more spectacular with the fringe. But it’s nice, I guess. It feels more ambitious than a lot of the other things on the runway.

Jenni, Erin, and Cornelius are in the top. Kimber, Rik, and Mah-Jing are in the bottom. The most surprising thing about the safe announcement is that they allow Laurence, who has immunity, and Brik who creates the worst thing maybe in the history of the show to skate by without so much as a word of reproach.

The comments on Kimber's dress are tepid at best. She's clearly in the bottom, but no one outright hates the dress. Zac says he had high hopes when he saw the fabric, but the complete lack of any kind of transformation makes it a disappointment. But the lack of overt disgust makes me wonder if they couldn't replace it with Brik's look and get rid of him once and for all.

The comments about Rik's look are all about the sheer lack of taste with it. They get the model to turn around and notice the obvious butt cheek issue for the first moment. I don't spend any time in strip clubs, so I'm not the best judge, but I did think the claims of her looking like a stripper were a bit far. Maybe a rowdy club girl, but a stripper? I think the bigger complaint is about the way the laces on the skirt are creating weird bunches in the fabric. I like Rik's outfit, but I do think the complaints are warranted.

Also in the surprising category, at least to me, is how much the judges love Jenni and Cornelius. No one comments on how Jenni's painted flowers are literally falling off before their very eyes. They also don't talk about how unflattering the two pieces under the rain coat are. With Cornelius, all of the conversation seems to be about the dress' transformation. No one mentions the plain white thing it is in the daylight. There's some talk about the unfortunate dart at the crotch drawing even more attention to her vag than the big smiley face there, but that's about it. They really like the emojis and feel like the look is very current. I hate it, but what do I know?

The highest praise, and this should come as no surprise, is for Erin's look. Nina comments that the look perfectly encapsulates demure and sexy, and I think she's spot on. This is a look that works both for day and night, and the transformation of it in the blacklight is breathtaking.

Erin gets yet another win, and Kimber going home means Mah-Jing sticks around for another day. More importantly, Erin is sitting really pretty with two wins and three visits to the top three. I can't remember the last time we saw this kind of dominance from someone right out of the gate. But after three episodes, this is shaping up to be Erin's competition to lose.

--The opening to this episode was pretty great. Two people talking about how horrible it must be to be in the bottom and how useless someone in the bottom must be while Kimber, who was just in the bottom, is sitting right there. I can't believe how hard I laughed.

--Mah-Jing has a tearful facetime conversation with his daughter that doesn't really do much of anything. Apparently, he's just a crier, as he cries multiple times during the episode. Personally, I thought his tears in the confessional after the phone call were more effective than the needless crying during the call.

--The winning look also gets a spread in Marie Clare, but that seems like a pointless afterthought.

--I cannot express how boring and pathetic I thought Brik's look was. That he's just safe without so much as a word from the judges is ridiculous to me. He can't be long for this world, but I can't help but to wonder what it is that the judges see in him that's kept him around this long.
Posted by Unknown at 10:30 AM