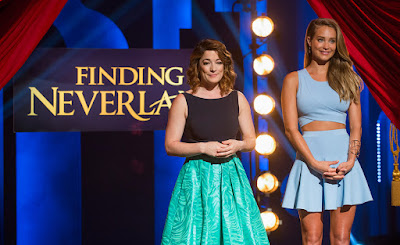 Did I promise to stop comparing PR JR to its predecessor? I lied. Or well, at least in this instance I won't be comparing the two shows on a functional level but in more of an intangible way. You see, last season of PR found us questioning the overall talent level of the contestants chosen to be on the show. Each runway left us struggling to pick out a solid top three looks and hoping for multiple eliminations. On PR JR, however, I have to say the opposite is more true: it's hard to honestly pick three bottom looks from week to week. Last episode had Jaxson, Jesse and Victoria in the bottom, and even though I didn't think Victoria's look encompassed the challenge, I did like it. So judging based on one's personal aesthetic appreciation leaves us with two bottom looks, and that's pretty standard for these first five episodes. So what are some of the effects of having a solid group of talent on a season of PR? Well for starters you can trust the contestants to be able to pull out stellar looks in next to no time flat.

This week's episode sees the contestants being greeted by actors from Finding Neverland. If that sounds familiar to you, it's probably because PR did the same thing back in its eighth episode of last season. Though, unlike the adults, we don't get to see the kids spending anytime watching the show, so for all we know they weren't granted the full on special treatment of their adult counterparts. The challenge is to work in teams of two to create a look worthy of the red carpet on a Broadway premiere. Each team will produce one look and they only have five hours to do it.

It seems a bit overwhelming, but with two people working on just one aspect of a look a piece, five hours seems like a life time. But when you throw a third helper into the mix and when that third helper is a past PR contestant, things look a lot more manageable. And so we welcome Samantha Black to work with Zach and Samantha; Amanda Valentine to work with Zachary and Matt; Fabio Costa for Maya and Peytie, and Sonjia Williams for Bridget and Jaxson. The kid's seemingly genuine excitement when they see their helpers is one thing that makes this episode so much fun. You watch these kids on the show and get the strict impression that they understand that they're a part of something bigger than just themselves and they're knowledgable about what's come before them.

Tim makes it clear that the alumni are only here to basically be seamstresses and won't be helping with any of the design process. There's no trip to Mood this episode, but Mini Mood is available for them to select from. Everyone gets to work and seems to move smoothly. Everyone except Bridget and Jaxson as the case may be who don't work together very well combining their respective aesthetics. But the two of them also don't have the worst kind of toxic chemistry that we've seen in pairs in the past. But their poor communication and lack of compromise lead to them having the worst Tim critique.

The colors they chose were all wrong and it's a bit ridiculous that they didn't see that sooner. Meanwhile, Peytie and Maya aren't faring much better with their interesting idea failing to come to life due (I think) to the limited kinds of fabric they have access to. Both cases see the previous PR contestants swooping in to offer the kind of help and guidance that they're there for. Bridget has a meltdown when they go back to pick out new fabric (with only three hours left in the day one might add), and Sonjia takes her by the hand and just calms her down. Her words aren't exceptionally gentle, but it's exactly the kind of firm hand and weathered experience that Bridget needed to get passed her emotional moment. And for Peytie and Maya, once they decide to ditch their white see through skirt and start looking at the ornate black fabric they have, Fabio suggests they use the reverse side of it for the skirt and that gives Maya the idea to go with a solid black but more flowing material when the time comes.


Zachary and Matt: I wish it was in a color other than red and I wish they had a bustier model to fill it out more. It seems like there's a lot going on here, but it could truthfully be great on a model of different proportions. The cut outs are sexy, and the movement is eye catching.

Samantha and Zach: OK. Good, not great. I don’t think they avoided having the jumpsuit be boring the way Tim said they needed to. The cape is a wow, and I even like the boxiness of the shoulders, and I love the print. But I think something needed to be different about the jumpsuit which feels swallowed up by the cape.

Maya and Peytie: This I love. It’s bold and makes quite a statement. Going with the flowing fabric for the skirt was exactly the right way to go. I wish the detailing on the top was more photographable as I couldn’t make it out from the walk on the runway, but up close this is great. The openness on the front to show off those shorts is really killer.

Bridget and Jaxson: The fit is great, the faux leather is really great and catches the eye exceptionally well. I like the color a lot too. It’s something that I think looks muted, but would really turn heads on a red carpet. All the right amount of sexy too.

So with four looks on the runway, you'd expect a top and bottom two looks, but the judges seem to like everything except Zachary and Matt's look. Admittedly, they like Samantha and Zach's outfit a lot more than I did, but I can at least understand what drove them to their compliments. Oddly enough, Zachary and Matt's look is touted as being too ambitious. So it seems like this is one moment when too many ideas is going to bite someone in the ass, and that's mostly because there isn't really a boring or bad look on the runway. Everything, at least according to the judges, is so good that we're left with the unenviable task of punishing someone for trying too hard.

There's no secret in the deliberation that one of the two of them has to go home. Matt's been in the bottom before. Indeed, just a couple episodes ago he was spared from going home in favor of not sending anyone home and having a double elimination to follow. So the fact that he's down here again suggests he's the most logical choice to be sent packing. But then there's Christian's (somewhat harsh) points about Zachary being the one who's actually let them down since the expectations on what he's capable of achieving are so high. Matt is clearly something of a favorite, though the jury's still out on whether or not his designs have earned him such a position, so it seemed very possible that Zachary could be going home here.

But in the end, the judges do the smart thing and send Matt on his way. Peytie and Maya both share a much deserved win, incidentally. Matt's send off seems to be the saddest one yet as Hannah and Kelly both tear up a bit and Hannah tells him he was a favorite of hers and she was the one who fought to keep him around so hard the last time. I know I said before that sending these kids home each week would be very difficult for a long list of reasons, and I don't want to contradict that at all, but I'm thinking the fact that everyone here is so talented plays a contributing factor as well. If the judges couldn't see fit to place two pairs in the bottom and deliberate over the fate of four contestants instead of just two, then how can they hope to make this easy going forward? These kids seem to be getting stronger as the competition goes on, and everyone left has a world of potential within them. The high level of talent here means we should get harder and more satisfying challenges, but that the decision on who to say goodbye to will get harder and harder.

--Peytie won the last immunity with the previous challenge. Knowing about that before this episode would have been nice, but beyond that eliminating immunity at the top eight seems a bit early, doesn't it?

--It's hard for me to believe that this is Maya's first win of the season, but there you have it. At this point, she's easily my favorite designer. (Jaxson is my favorite person, but that's another matter all together.)

--Matt's the second person to go home and acknowledge that he's sad to leave the other contestants because he got closer to them quicker than he has anyone else from back home. Again I say this show stands to be really important.

--Which only seven contestants left, who do you think deserves to make it to the top four? My money is on Maya, Zachary, Zach and Samantha. I think Jaxson isn't long for this world, sadly, and while I like Peytie and recognize she's the only one with double wins, I also think it would be easier for her to slip up one week and miss the cut given her particular aesthetic. Samantha has slipped from my good graces, but the judges still seem to love her, and she does have the most unique voice. I could be tempted to replace Zach with Bridget, but I'm wondering if we don't end up with an even split between the girls and the boys.
Posted by Unknown at 2:53 PM