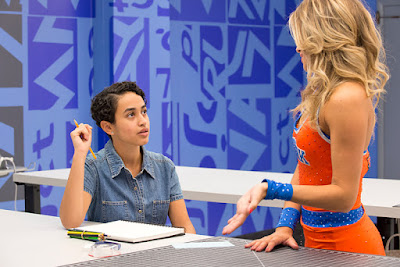 PR JR must have known it's season would take them into the holidays. They must have known that
they would be contending with a two-week long hiatus in the middle of their first season. So then why didn't they try to create a better episode for that return? Don't get me wrong, as I discussed so many times during the last season of PR, you can only ever work with what the contestants and judges give you to work with. But that's not to say that they're totally helpless. They can't control who's going home when, and they can't control what the designer's create on an episode to episode basis, but what they could have done was make sure that the challenge for their sixth episode was better and more entertaining than this one turned out to be. The last time we saw this show, they were giving the contestants, in teams of two, five hours to make an elegant red carpet gown, and they were bringing in past contestants to help with the time crunch. There were tears, some sage wisdom from the grownups who'd been here before, genuine excitement from the contestants over being able to work with PR alums, and a collection of great (or at least interesting) looks. Now we're back two weeks later and PR JR doesn't build on that episode at all; instead, they return from a hiatus and take a step backwards.

The doom of the episode is clear from the opening moments when Hannah announces that the Knicks City Dancers would be the kids' clients for this episode and each and every single one of their faces fell in despair. Granted, the fear was that they'd have to create a dancing/performance outfit. There's a sigh of relief when they're told they're actually just designing whatever the client wants, but their obvious lack of interest in working with these women wasn't overlooked.

The sad thing is putting every contestant out of their comfort zone by having them design some kind of activewear--dance uniform might have produced a more interesting episode. Instead, most of the clients want something more akin to ready-wear. They each have a special story about where they're going and what they're doing, but ultimately it all boils down to normal activities performed by normal people who want normal clothes. It's not that this can't be interesting, indeed the streetwear episodes, and "real women" episodes have long been great; designers having to tone down their high fashion sensibilities while still creating something that you couldn't buy on a table at Old Navy is interesting. Moreover, the client-based challenges are an important PR staple. But this episode needed something to push it over the edge. More difficult clients would have been nice, but I can understand not wanting to put the kids in that kind of acidic position. Excepting that, I'd have saved the client episode for somewhere later in the season and put another unconventional material challenge in this spot.

If the confines of the challenge aren't willing to bring the drama, then you've got to hope that the consistently high talent level of these kids will help to elevate the hour. But by the time Tim's coming in to visit, everyone is doubting themselves, feel out of their comfort zones, and nothing is really standing out as being great. Tim is worried about the construction of Jaxson's top, so he goes with him to Mini Mood and finds a better fabric in the same color as the first. He points out multiple construction issues with the designers and a couple of looks are boring. He's impressed with Samantha's look, but I certainly wasn't. Or to be more specific, the fact that she's making yet another oversized coat left me felling flat. I loved Samantha at first, but she's quickly become horribly one note to me, and I won't really be able to sing her praises until she can prove that she's able to do something else.

Nothing more happens before the runway except that there's a weird kind of pre-runway Q&A session between Hannah and the contestants. I can imagine that this is something that happens each challenge, but given the show's hour long runtime and their constantly being pressed for time, perhaps we just haven't seen it prior to this point. With that being said, this being cut from each episode is the way to go. There's more time available the fewer contestants we have left, and I would hate to see that time being occupied by this uselessness. Nothing is earned, learned, or gained by the conversation.

Samantha: I could take this time to continue complaining about her seeming inability to create a new or different silhouette, but the fact of the matter is this isn’t horrible. The skirt is a simple and boring, and even poorly constructed denim skirt, but the colors go well together, and the fabric choice on the jacket is bold and new. So I like it in spite of myself, but I don’t want her winning challenges until she can prove to me that she can do something else.

Maya: There’s no hiding that Maya is one of my favs, but this is pretty off-the-rack simple. It’s adorable, and I love the corset laces on the back of the top, and the pants fit wonderfully well, but other than that it’s a pretty boring look.

Zach: Nice open back, and I think adding the dark fabric to the hemline was smart. I like it. I don’t think it’ll turn heads, but it’s nice.

Jaxson: I hate the fabric of the skirt. I didn’t hate it in the workroom, but there’s something about the shine to it on the runway that I hate. And the movement of it is stiff and unforgiving. But the back is gorgeous, and the top as a whole is really nice. So no complaints there, and since she did want a summer dress, I do like the color.

Bridget: I hate this. It’s boring and uninspired, and the kimono doesn’t look like any kimono I’ve ever seen. I can see how this robe like thing could be considered to be inspired by a kimono, but capturing the sleeve shape isn’t all that’s needed to consider this to be an actual kimono. Which is too bad to me because I do think putting a full kimono over that boring ass thing she designed would have saved this look.

Zachary: Another nice open back. I think the hemline still looks a bit messy and is way too high, but I do like this look. I agree with his points about the flowy nature of the pants matched with the structured nature of the top. The colors feel a bit muted to me, but that’s a small quibble.

Peytie: Messy is the first word that comes to mind. I love the color and I love the movement of it, but the proportions on the back (where that razorback design meets the rest of the fabric) is all off, and the hem looks messy and haphazard. I think that was purposeful, but it doesn’t feel as purposeful as it should. And the back just looks like a mistake. It’s a shame because that fabric in a better constructed dress could have been a wow moment.

Samantha, Zach, and Zachary are in the top, Bridget, Maya, and Jaxson are in the bottom. This is where I'd like to see the show slow down and take it's time. I don't need pre-runway Q&As, but more time with the judges would be highly appreciated. Zach is praised for understanding and thinking about his client's body in an impressive way. It's clearly the best thing we've seen from him thus far in the competition.

It's said, multiple times, that "Samantha is back!" with this look, but Kelly is at least willing to admit that the skirt is a problem. But that doesn't stop her from loving the rest of the look and acknowledging that Samantha pulls those fabrics and those colors together in a way that she wouldn't expect anyone to be capable of.

Zachary is commended for his continued elegance and intelligence when it comes to dressing a woman's body. The hemline is all wrong on his pants, and everyone knows it, but it's the only real complaint about the otherwise stellar look. Kelly commends him for using the olive color on the pants (which I initially didn't love) and he points out that it's the same color as his model's eyes and I fell a bit more in love with him. This kid is smart and talented and he knows what he's doing.

On another show, or maybe just another version of this show, Aya's question to Maya about whether she thinks this is some of her best work or not might seem a bit rude. But there's something about the way Aya asks, and about the way their complaints about Maya's look are all couched in the fact that they have such high expectations for her that makes it feel more kindly prodding. But the fact of the matter is Maya's look isn't bad, it's just not strong enough. The judges keep using the word "fine" to describe it, and never has that felt more like a slap in the face than it does when they say it.

Jaxson and Bridget are in way more trouble than Maya is and I think they know it. The judges have nothing positive to say about Bridget's look, and they like Jaxson's top but hate the stiffness of the fabric he choose for the skirt. Christian makes a great point about the skirt wanting to be "sexy but still covered," and the discordant note that causes.

In the end, Zach wins and Bridget loses. The sheer fact that the judges couldn't find a single thing to compliment about Bridget's look while they liked Jaxson's top means this was an easy call to make. Some part of me wondered if Tim would save her since she'd shown her talent in the past and has won challenges before; maybe she shouldn't be so punished for what amounts to an off day. But Tim seems to agree with the judges' decision, and Bridget goes home.

--So PR online doesn't have the final looks photo album up and running by the time I'm writing this, so I'll check back later and try to get the links up for the runway. But if you're wondering why they aren't there this time, it's PR's fault and not mine.

--And then there were six. I'm guessing we're gearing down for the end here. Will ther ebe three or four people showing at NYFW?

--Tim says how much he loves this group of contestants a number of times this episode. It's cute and sweet, and I loved it. But it also could have been creepy.

--I know you guys aren't really sports fans like I am, but dancers and cheerleaders are the lowest of the low to some of us who are. My good friend has been a football fan for a long time, and he went to a game with his young niece and some of his extended family before. And when the child (she couldn't have been more than five or so) said she might want to be a cheerleader, he told her "I'd rather you just be a stripper, that's way more noble." So you can imagine how I felt seeing the Knicks Dancers in this episode.

--One of the things I did like about this challenge was the way that, even though they were all dressing the same kind of woman, they weren't all designing for the same situation. The ability to have that many varied types of outfits on the runway is better than a bunch of different dance uniforms.
Posted by Unknown at 4:09 PM