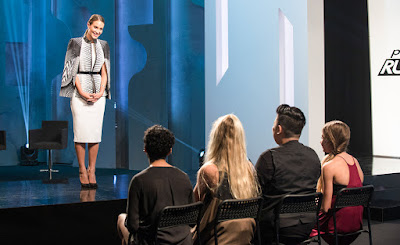 Late doesn't even begin to cover it with this one. So I really dropped the ball, I know it, and trust me no one can feel worse about it than I do. But for the sake of my sanity, let's just jump in. I'll write up this episode quickly, and then try to get on to the most recent episode before this weekend is over. Two for the price of one. The price being free of course since I'm still trying to be the hardest working man in unpaid, Project Runway blogging. But still. It's easy to wrap up "Make a Statement" quickly because it's honestly a pretty stock episode of the show up until the end. An end that wasn't anywhere near as shocking as the previous double elimination, but an ending that at least releases the episode from it's rather humdrum opening moments and makes it into something interesting.

The episode before the finale starts can often seem a bit preliminary. Sometimes, as I honestly think is the case here, you end up with four or five designers who all honestly deserve to go to NYFW, and that can make the final cut into something of a nail biter. But most of the time, there's only three or four people who truly deserve to go and the final cut is pretty obvious going into the episode. And in this place on Project Runway, when there's only four contestants left to begin with, the writing tends to be on the wall that no one is going home. PR has (unfortunately) had four contestants in the finale for how many seasons now? It's why no one was really worried about Edmond at the end of last season. Of course he was going to be saved and the four of them would compete at NYFW.

PR JR, however, doesn't necessarily have that going for it. This is the first season. And in a lot of ways it's similar to it's adult predecessor, but in a lot of ways, it's also different. So when two people are rushed home in the seventh episode, and the eighth episode rolls around with yet another elimination challenge, there's a very real possibility that someone could be leaving and we'd end up with a top three. PR JR is a smaller show and a younger show in more ways than one; a smaller finale would make sense and go a long way towards establishing this show on its own without much reference to its predecessor. Yes walking into this we all know Tim Gunn still hasn't used his save, but that doesn't necessarily have to mean anything, right? OK, we'll circle back around to all of this towards the end. For now, let's start at the beginning.

There's something powerful, but also a bit desolate, about the shot of the four remaining designers sitting at the runway to open this episode. It's empowering to think of all it took to get here, and sad to think of everyone lost in the process. But then there were four, and it's time to move it along. The designers are told that their last challenge before the finale is to use themselves as inspiration and to create a look that is uniquely them. They've got $400 and only one day to do this. There's something simple and elegant about this challenge that I love a lot. While I don't think any of the challenges were quite as wacky or out there as some of the PR challenges have been in the past, I think there's something to be said about reaching this moment and asking the contestants to remind us about who they are deep down, and perhaps even show us who they've become in the wake of the competition. Peytie in particular is someone who's aesthetic seems to have openly changed over the course of the competition, so her ability to create something unexpected is considerable.

There's some aspect of the challenge that has to do with irons and iron on prints or something, but beyond the good looking guy introducing it to us, I wasn't paying much attention. What follows is a long line of the kids talking about who they are, what their aesthetic is, and what they want to accomplish with this look. It's all rather interesting and engaging, but I wouldn't go so far as to call any of it drastically important. Everyone has an idea and a way forward except for Zachary who seems to be lost for inspiration or direction at the most important moment. It's not something we haven't seen before, but it's rather distressing to see here from someone so capable and talented.

The meetings with Tim are stock standard and straight forward. Everyone's on a good path except for Zachary. Tim meets with him and spends a lot of time talking him up and making suggesting to get him headed where he needs to go. But I never quiet got the impression that he left that interaction feeling all that confident about what he was doing. On to the runway.


Peytie: The fringe looks like an after thought. I like the movement it adds, but I also think the piece moves well without it. So I’d be find if that were taken away. Other than that, this look is really a wow. The shape of it is fascinating, and when it turned the corner, something about ti screamed Peytie to me. That’s not even to mention the brilliant color. Great job.

Samantha: Listen, this girl has a point of view that is all her own, and I respect her for it so very much. But for this to be the look she sends down the challenge before Fashion Week makes me think she should go home. Another (well-made) oversized jacket? It swallows the dress whole, and the sad part is I’m not totally sure that that isn’t a bad thing. From what I can see of the dress itself, I’m far more impressed with the idea of it than the execution. Her play on gender is a lot of fun and I want to see more of it in the world, but I do not like this outfit at all.

Maya: The openness in the back and the clasp in the front take my breath away. Which isn’t to take away from the rest of the look which I love too. Maya uses words like strength, power, and confidence to describe what she’s going for here, and I think she captures all of that. In no small part because some aspect of this feels like a super hero costume or something. But that’s not a bad thing here because I think she knew just where to pull back and where to go big on it to make that apparent but not overpowering.

Zachary: I think the back is way better than the front. In the front, it feels like he’s letting the fabric do most of the hard work. The true design of it is found in the back, and that’s breathtaking. It’s good, but I’m not ready to say it’s the best we’ve ever seen from him.

The judges like Samantha's look more than I do, but we're in agreement that Zachary's look isn't strong enough. Kelly points out the fact that it’s impressive that Zach added these details to his look, but none of them shine through on the runway. I like Christian’s point about flipping the fabrics of the skirt so the one inside ended up outside. But I also like Aya’s point that he’s got the best use of the iron-on things.

I don’t know that I agree with Hannah calling for something more feminine in Samantha’s look, but I also don’t agree with the judges overall praise of the outfit. I will say that I like the dress more when the jacket comes off of it, so I’ll retract my prior statement that the look being swallowed by the jacket is a good thing, but I’m still not impressed with it. I will also say I’d like it if the belt end looked more like dress shirt sleeves. But that could also be one element too many.

Maya and Peytie's looks are loved universally. So they end up going straight through to the finale. Samantha and Zachary are the last two left, but as Zachary noted in the greenroom, his look was pretty much the only one they didn't really have positive things to say about. So Samantha gets the go ahead and Zachary gets a very teary good bye.

But back in the greenroom, with everyone hugging and saying good bye, Tim comes in and uses the save. It's a complete repeat of what we saw with Edmund last season and the save being used in the final moments of the competition. One the one hand, I'm a bit disappointed that the show isn't going with a top three instead of a top four, but on the other hand, these four kids truly do all deserve to show at NYFW. Zachary truly stumbled here, but does that mean he should be out of the competition? I think there are people who might say yes, but I'm not really in that camp. I'm OK with this outcome, though I also recognize that it robs the end of the episode of much of its inherent drama. But so long as the outcome is right, it shouldn't matter. And Peytie, Maya, Samantha, and Zachary going to the finale is the right way to go.

--Apparently the finale is going to be just what it is on PR. Tim gets home visits, there's a last notes runway, and then NYFW. I'll get on covering that episode as soon as I can.

--Sorry for the delay, but I was having work stuff, and lots of distractions and stress. It's all worked out, but it was a crazy couple of weeks. Should be pretty back on track now.
Posted by Unknown at 3:50 PM