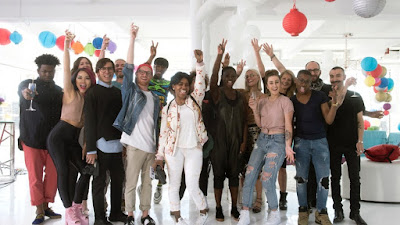 And so here we are again, another year, another season of Project Runway. At this point, if someone asked you what it is that you expect from a new season of Project Runway, what would you say? Some fashion, weird challenges, a little drama, Tim and Heidi being, if not themselves, then certainly the personas they've crafted for themselves over the last 15 seasons. Perhaps that's why we keep coming back: Project Runway is not the kind of show to ever really change.

And that fact is no different here. We start off with 16 designers, and by the end of the first challenge there will be 15. Everyone arrives to a nice swanky welcome party. It's all decked out because, as Tim and Heidi inform them when they finally join, the decorations for the party are to be their materials for the challenge. First challenge for the season is also the first unconventional materials challenge. We've done this before (I'd swear) but it seemed fresh and unexpected. What wasn't unexpected were the number of people swearing they'd never worked with an unconventional material before and had no idea how they would blah blah blah.

Anyway, there's a mad dash to grab the most striking elements of the room and the most fabric-based materials. There's a rather serious scuffle between two contestants (Cornelius and Mah-Jing I believe but to be honest I  won't start remembering names for a few weeks), but it's not a huge deal. It might be one if it comes up again, but for now I don't care.

In the workroom, everyone pretty much gets along fine since no one knows each other well enough to love or hate anyone else just yet. There are those two people who went to school together and have a little history, but it didn't seem to be the juicy kind of history no matter what the producers wanted us to think, so we'll gloss over that as well.

There are three main takeaways from Tim's visit:

Mah-Jing Wong: More yes than no, but only slightly. She looks like someone balled up a lot of paper and threw it at her. It’s thought out instead of haphazard, which I appreciate, but it’s not very special.

Jenni: I’ll give her credit for the hand painting and the creation of separates, but the feather boa wings made me think of Big Bird, so no.

Sarah: I like that I don’t know what the material is, but the top does look a bit like cut up muslin to me. Or, more specifically, cut up plain fabric. Which is bad, but not horrible. I’ve seen worse.

Nathalia: More feathery arms, but I mostly like it. I don’t know if it says lux so much as (improbably) expensive hooker, but hey. You know, like a hooker who would call herself a call girl but you’d look at her and say, No you’re just a hooker. Like that.

Rik: Boring and safe but not bad.

Ian: Ok, I’ve been doing this long enough that you guys know how partial I am to the cute gay ginger. Which is my way of saying I want to like Ian so bad, but this dress is fucking hideous. Give me a break, it’s like he didn’t even try. Bullshit cut up photos stuck to a muslin dress? Get the fuck out of here.

Tasha: Stop! Hamma Time! So here’s the thing, Tasha made her model look wider in the hips than is usually acceptable on this show, but I must say, I actually like this look. It’s cute and quirky, and somehow ends up being unique. I don’t think it’s a top look, but I’m certainly impressed enough to want to see more from her.

Erin: I’m mixed about this. It turns the corner and I immediately say NO, but then I watch it more, and I guess it grows on me a bit. The feathery motif of the night isn’t doing anyone any favors, but there’s something about this outfit that I can’t bring myself to fully hate.

Linda: Linda’s look is nice. I think it’s classy and unobtrusive. It’s classic without being too simple. It’s paired down but still holds onto some element of the unconventional materials. However, it also looks like a woman her age made it. So while I like this look, nothing about it is surprising or makes me feel like I want more.

Kimber: I hate the back, but the rest is ok.

Laurence: There’s a cut and a shape to this that I certainly like. But it doesn’t look like she pushed herself at all to use the materials. She’s got the ability to be a stand out designer, but this doesn’t feel like it’s within the parameters of the challenge.

Brik: I want to hate it, but I can’t. It’s just flashy, crazy, and unique enough to make me smile. The back, the corset top, the shoulders, I love all of it. And he fully committed himself to that crazy glitter, so I’m happy for him.

Cornelius: I love it. The color, the placement of the plates and the flowers, just all of it. This is a yes for me. I’m less sure about the back and the trail of flowers down it, but hey.

Roberi: This made me smile. I love it in spite of how short it is. It doesn’t look like any of her is peaking out of it, so that’s good, but maybe like an extra 1/4 of an inch would be nice. But still, it’s well thought out and well executed, so I like it.

Alex: I like this, but some part of me thinks there’s one color too many somewhere in there. Towards the midsection, I feel like something could have been paired down a bit, but it’s also cool as is.

Tasha, Erin, and Dexter (really?) are in the top. Brik and Ian are in the bottom. Roberi is in the bottom, but given they're comments, he's actually more in the middle, so whatever.

The actual surprise, for me at least, is that they really liked Dexter's look. I've gotta tell you, Runaways, I watched this thing walk the catwalk, I listened to the comments, I looked at it during the closeup inspection, and I simply don't get it. Heidi and Nina both seem to think it's fit for a real runway right now. This might be true, but I've never been a fan of that kind of fashion personally. They all seem to like the volume and the tribal feel of it. Zac calls it an Eskimo poodle, but he means it affectionately and not like the rebuke I think it should have been. Every year the judges make a call or two that I simply don't understand and this is one of them.

As I listened to them talking about Roberi's look, I was less surprised than I expected to be when I found out he was in the bottom. They're pretty much split down the middle on this one. Nina feels like she's seen this look on PR multiple times before and she's bored with it. The guest judge thinks it's too short. But Heidi loves it and has no problem with the length (no surprise there), and Zac feels like we've seen it before but never quite like this, so it's a good a thing. I'm left thinking he could have been safe and they could have talked to someone else instead, but whatever.

In the end, Erin wins with what Zac referred to as his favorite look of many seasons. That's much higher praise than I'd give it, but I'm happier with her win than I would have been with Dexter's. Tasha's look doesn't stand up to the closer inspection, which is too bad. But she got enough of her personality in it to make them appreciative.

The obvious choice for loser is between Brik and Ian. As we've seen at this stage 100 times before, it's a choice between Brik's poor taste level and Ian's sheer lack of creativity. One of these days I (or someone who actually cares more than I'm pretending to at the moment) will have to look back over all of the seasons of this show and calculate how many times this has been the dilemma and just what the percentage is for choosing poor taste over lack of creativity. My guess is that poor taste will get a pass over creativity way more often than not, but I could be wrong. I wasn't wrong here, and Ian is rightfully sent on his cute little way.

To his credit, he's not upset about it. I mean he sheds a few tears, so maybe he is upset but he's sticking with the stiff upper lip reaction. But he certainly stands behind his design. He loves the dress he created and sent down the runway. To do something else would have been to lose himself in someone else's vision and he's not ok with that. So I tip my hat to him for standing true, but I also know that he had to go home. Because if this is the caliber of what we can expect from you all season long, then you have no place here.

And so ends another by the books first episode of Project Runway. I want to complain about that. I want to hold my viewership and this show to a higher standard and demand something more. But the practical side of me says no. If it ain't broke, don't fix it. If there's one thing we know about PR it's that change is very rarely for the better. The show has gotten back into some of its more positive ways as of late, so I'd hate to see them lose momentum now. It's shaping up to be a rather typical season for the show, and that oddly means I'm excited to keep watching.