Project Runway All Stars SE5 E09: "A Touch of Style" 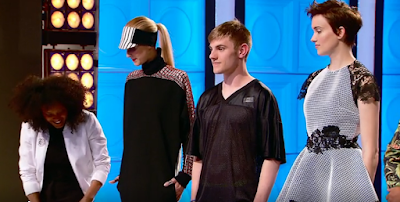 Many things to discuss.

One thing this season seems to be doing very well is highlighting New York City. I've seen all of the previous incarnations of PR, and remember more than I'd like to admit. Where my high school French is hiding in my brain, no idea, but say "Viktor", or "the challenge with the stilts", or bring up the time the designers were sent to the worst fake restaurant and then ripped the furnishings apart for the unconventional challenge, I can call up these images. I think my nephew has green eyes, but that, I need to check. Sometimes NYC has played a significant role in an episode, sometimes it was shoehorned in, and one time the misguided location change to Los Angeles happened. Why did that seem, so off putting, aside from the reduced presence of Nina and Michael? Just did. But lesson learned, they moved back home and all was forgiven.

This season just seems to be hitting some lovely New York notes, like visiting the Alvin Ailey studios and today, going to Coney Island. I think we went there before, also for an unconventional, but this time they visit the ballpark home of the Brooklyn Cyclones. Nothing more charming than minor league baseball, and a lovely location, good spirits and a tie in with Alyssa's very well known line of "athleisure wear" make it a nice start.


Athleisure wear, the new business casual. Is this a thing? Not only a thing, we will be told later by Zanna Rossi Roberts, but one of the biggest trends at the moment. Oh now I feel stupid. In fact, I might even be participating in this trend as I type this, without knowing that for once, I am fashion forward. Let me check...  nope Couch Casual seems to be my style tonight. But it's the NEXT big thing and you heard it here first. I am the Olivia Pope of wine drinking ensembles.

So the remaining seven put away their meager hopes of this being a day for fun and rides and go into the green and sunny field where they meet not only Alyssa, but their models.

A note on that before I forget - notice the models have switched up almost if not every week? I haven't been paying close attention to many but the odd-looking in real life blonde African American girl (my apologies if that is not her background) and the impossibly willowy dark skinned goddess with the beauty mark on her upper lip stand out. I recall she was Kini's "Alice Through the Looking Glass", and that girl can WALK. Alexander was sent home last week for his Cinderella, but his model stood out with her cute short hair and flawless - as flawless as a sent home look can be - styling by HBM and the hair guy. Tonight, she'll walk for Sam, so she didn't get cut. Surely having constant models for each designer is a nice way to make it easier, a streamlining concession for time? I shall go back and see who has been switched up, but I'm sure Odd Blonde has walked for a few of the gang.


Alyssa has a fashion line - who knew?  - called Touch, and a quick search shows she also has the domain Alyssa.com. Well played, Milano. She tells the designers that she came upon this idea when she went to the merch store at a game and could find nothing feminine (used to be so true, thank you for the girl cut tees, manufacturers) or fashion forward (err, not the point of a Red Sox jersey, Alyssa). So she got to work designing and now she shows off the models wearing... basic cotton blend looking tees and casual pants. Really, it looked like Lands End on a good day. So without confessing that her line needs help, Alyssa tells them to got into the athleisure trend and the winning design will feature in her line.

Later on the runway she will clarify, the winning design will be MODIFIED and mass produced for sale on her site and wherever else her stuff is hawked. Now I'm not in the US, so maybe it is omnipresnt at boutiques or Nordstrom's or, err, Kohl's? You tell me. But she could use some pizazz if this what she has to show.

Asha has the clever idea to making a skirt that looks like a baseball jersey wrapped around the waist, and a top playing on a sports bra;  Ken is going hoodie with red and black piping – it’s someone’s team colors, he muses - Layana is up for this and goes big with multiple-pieced textured leggings as the main attraction; Emily is doing cool urban white; Dom is doing a Jil Sander ish dress (okay, hmmm, a dress) with a detachable skirt that goes from maxi to knee length, and Kini is doing a cool swing coat over jeans, the coat color-blocked with white mesh, and speaking of mesh, Sam is going to do a cheerleader-style skirt that his sketch shows is not cheerleader at all, and it’s a dress, and he’s using the same mermaid in a net fabric that he used last week and Kini is using this week. Kini who may or may not have thought of that before he chose his textiles, confesses, maybe I’ll show him how it’s done.

The Producers salivate in the background.

Zanna visits - will she be impressed

Zanna’s critiques, on the other hand, do cause some panic. After announcing that this a trendy trend, she has to, bless her, sort of finetune it for the seven, pointing out that athleisure should go from casual rah rah go team to out for the evening. In this case, it must be runway ready. She doesn't like Emily's cowl neckline, ok, I get that. She loves Dom's futuristic looking man dress, not sure I get that (for this challenge), she spins Sam's dress form to show a flirty dress that is mesh over... something (Neoprene?) in the front and almost all black lace in the back. Two different outfits, she says. Does she add, and neither of them would be ATH or Leisure? FFS, lace? Sam, btw, is the cast's and his own fave for this challenge. This is his dojo and he is throwing stars.

Zanna's worried that both Kini and Layana are leaning too “sporty” and less athleisure, a hard to evaluate distinction til she mentions, this shouldn't go to the gym. That does seem to clear it up, the ATH in athleisure isn't the wearer, this girl is watching not participating. Okay, useful advice. Layana's legging are not a concern for her, or her admiring codesigners, they would never go to Zumba. Ken has little to show ZRR, so she prods him to work hard, and off she goes.


As the night goes on, Formerly Angry Ken, as I was prepared to rename him, skips back into his old ways. Kind of. Ken has his idea in place, but not the constructed piece, so he can't fit his model. He seems a bit tense for a while but it builds up and then takes an incorrectly sewn shoulder seam, a silly but harmless mistake if you have a lot of time, to set him off.

A recurring theme in these recaps has been, will, and if so when, will we see the old Ken. Now, I don't mind a bit of snarkiness, and Ken has been involved in the Kini/Sam drama as mostly an observer, but Ken's rage on his original season was scary. As in, I felt equally scared for him as well as the people he was engaging with. What was going on beneath the tuxedo tattoo? His triggers were hard to predict and he seethed with hate and anger that could not be good for him. So back to this week and here it comes as Ken tosses his hoodie to the table and says he has had it. He storms out.

Except, he doesn't really lose it. Lose it in a fed up, tired tired tired, can't do this any more, freak out way. Yes. He walks out, past startled floor runners in the hallway, and, followed by cameras, out to the street, where he hails a cab wearing sunglasses at night. So he can, so he can, watch the pressure cooking in the rear view mirror and get away from all of this nonsense.

But let's talk about what he didn't do. He didn't yell, he didn't blame anyone or pick a fight, he didn't give nasty parting words, he just said, I'm done, and left.

End of. And considering his past responses to pressure, this was controlled and within the parameters of what we might do. Sometimes I wonder why more of the various cast members don't, with the lack of sleep, etc. For this guy, I suspect he has gotten some help with his issues, and surely Lifetime wouldn't have him back if he hadn't. So good for Ken. Not good that he left, but the way he handled it.


But is he gone for good?


The designers are stunned, but, hey work to be done so on they go, Layana sewing endless bright blue pieces together for her possibly kick ass leggings and Sam revising his not-for-this-challenge look into something better but also not right.

The next morning, no Ken. In All Stars we don't get to see much if any hotel time, so what was said? Does he room with Sam and Kini? Did he go elsewhere to sleep?

Ken then reappears, a new man. New ish. He brushes away the concerns he receives in a friendly way and goes back to his look. Fast. He does note that the others were about to pick over his remaining fabrics, and I think gives Layana some leather he isn't using. Who (aside from Stella) would have time to sew leather at this point? He's good with his look, does a last-minute addition of black pockets, and seems at peace. Not Dalai Lama peace, but for Ken, content.

Sam has finished his changes and Layana, finally done with the leggings, changes up her top into something fancier. A plain white shirt won't do.


Guest judge this week is Kristin Cavallari, who designs something or other as it seems everyone from a successful docu-soap does, and who spends a lot of time at games as she is married to Bears QB Jay Cutler. She seems nice and young-matronly. Isaac is dressed in his knitting circle casual to suit the theme and does a sheepish "go team" to the group. Not the "hello fairies" from last week but cute.


Safe: Emily. Remember, she has won one, but she always seems safe, although her designs are anything but.


Tops: Kini, Dom and Sam? Asha?
Bottoms: Layana, Ken and Sam? Asha? Bit of a split on those two. Asha's too literal and Georgina doesn't like the buttons down the front of the skirt, but it is pointed out to her that baseball jerseys do have those visible buttons. It does look sloppy though.

Sam gets undeserved praise for putting a girl in a lacy dress. Someone did point out that Sam will likely suck up to Isaac by using flats. Well, it worked. I think I'd like this dress if the challenge was sightseeing in Paris, maybe? But this is too dressy, too cutesy, too much

Winner, Kini for his awesome coat. The judges even liked the length of his basic jeans.

Loser: Layana. The cool last minute top she made did not go with her leggings, style or color-wise, so taste issues and being on the bottom forever caught up with the sweet Brazilian.