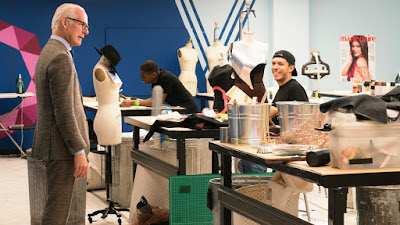 While Forest Gump's mother was explaining to him about chocolates, my mother was expressing to me  the importance of not fixing something that ain't broke. If one thing's clear after 15 seasons, Project Runway has taken that advice and run with it. Here's a show that's so in love with its own formula that it won't even try and shake things up after a week's hiatus. And rightfully so since its a formula that tends to work more than not, but it doesn't make for exceptionally exciting viewing.

The last time we were together, I was complaining about this very thing: the lack of personality, the lack of story being told. But last time the episode had that surprising ending to rely on. This week we aren't so lucky.

In the episode's defense, this week they were planning on the challenge itself bringing all of the drama needed. It's the typical avant garde challenge for Project Runway, but this year they've added the twist of using unconventional materials.

I'll give the producers this much credit: the avant garde challenge shouldn't ever come any earlier or later than the top six. Generally speaking, I don't think the talent level is paired down enough before this point to have a really good runway show. After the top 6, the stakes are just too high, and you risk forming your top four on a fluke gimmick challenge. So kudos on the placement of the episode, but they could have had better execution on the finer points.

The rest of the episode is about what you'd expect. The longer run time mixed with the smaller group number means we spend more than enough time with each designer talking about their concepts. We see them working with the metal in unique ways, but since they have two days for this challenge, nothing really comes together until the second day.

There is an example of solid and consistent storytelling here. Erin wastes her first day on creating these weird applique things. Mah-Jing tells her she's using the wrong glue and it's not going to do what she wants when it dries, but she ignores him. The next day he's proven right, her flower things are unusable, and she looks screwed. It's solid storytelling because we've seen this tendency from her multiple times before. The way she'll spend all of her time on one little thing and the rest of the look will suffer because of it. But if you expected this to translate to something major down the road, we'll circle back around to it at the end.

Since there's nothing particularly exciting in this episode, allow me to take the time to talk about something PR has always done and that I've never really cared for. All of the confessional moments in which the contestants talk about the other designs. I've never cared one bit about what these people think about the competition's work. Very rarely, if ever, are their comments reflected by the judges. Most often their positions are colored by general dislike of one another or the sheer fact that they're in competition with each other. So why do we have to spend so much time listening to them dis on each other's looks? This is one of those moments where the time could better be spent elsewhere. But I digress.

Cornelius: I've got to say, I'm impressed with the finished product. I think the tube placement is a little suspect to be sure, but there's something to look at. The color is a great addition, and the fabric he chose is very chic. It conveys his vision well, so I think he pulled this out.

Mah-Jing: I think I hate it, but at the very least I certainly don't get it. It looks like a simple dress on to which he glued, or sewed a lot of wire crap. The asymmetry of the wire pieces on the back may have been purposeful, but it certainly doesn't look like it. And it's so obvious she can't walk without her hands holding the damn dress up. No good.

Rik: I love this and it's totally wrong for this challenge. To be fair, I love it more from the front than from the back. The metal piece on the back looks like a weird cape or reverse bib thing. From the front it's chic and cool, and it's like he said: wearable. But how wearable should an avant garde look be? If this were just an unconventional materials challenge, I'd have him down for the win, but as an avant garde challenge, it just doesn't go far enough.

Erin: Yeah ok. I like it. But I hate her, so it's hard for me to like it. The top is the only thing about it that's unconventional, but the entire top is unconventional, so I think that's a good mix. It's risky and certainly out there in a way that I think says avant garde. And I'll commend her for making pants instead of a dress. All in all I'm more impressed than I wish I was.

Laurence: I don't think the length is really the problem here, the problem is she created a lovely little black dress, but that's it. She needed to take this way farther. Is it beautiful? Yes. Is it well made? Certainly, Is it right for this challenge? Not even remotely.

Roberi: I think the statement piece of the mask sales this for me. It puts the entire thing over the top, but I wonder if the judges will think it makes it all too costume-y. I hope not because I love this. It's shape and sleekness, it's all way more sexy than sheets of metal should be.

The judges are at least all in agreement that there was something to enjoy about each of the pieces on the runway. Which is exactly why you save this challenge for the top six. Ultimately, it's Roberi, Rik, and Erin in the top, Mah-Jing and Cornelius in the bottom, and Laurence just kind of oddly in the middle.

Mostly the judges think Laurence should have worked in some color other than black this time around. They like what she does, and that's understandable, but they're ready to see a little more from her. For my money, I thought the same thing on this challenge but not about the color. I thought she could have made her typical shoulders but then just made them bigger and more exaggerated and that would have been a fun way to go. Either way it seems like she hears the criticism and we can expect new things from her in the last challenge before NYFW.

One clear theme of the judging is how well incorporated the materials are. Rik and Roberi are commended because their metals and their fabric blend so well together. Rik in particular isn't hit nearly enough for the look being subtle. Heidi points out that avant garde doesn't have to mean unwearable, so that goes to show you how much I know.

Mah-Jing and Cornelius on the other hand, not so much. About Mah-Jing's look, Nina says his unconventional materals aren't anything more than decoration. They're more split on Cornelius' look which they certainly find disturbing, which is what he was going for. But again the issue of incorporation is brought up and Nina thinks it's a rather cliche vision of the future. Heidi seems to like it more than the others and claims that fashion should be provocative.

Erin's look they love. The color pops on a muted runway, they like it that she made pants, Heidi of course loves the amount of skin shown, and they all think her top is interesting. Zac points out that she should have thought about what it would look like from the back a little more, but that's really the only negative comment. So for all of the groundwork laid earlier in the episode about her poor time management, Erin actually ends up the winner of the challenge. I guess there's an arc there to be noticed, but the foundation was one where you expected her to crash and burn. You expected her to waste time for the last time and pay the price, but that wasn't the story at all. I don't know if that's a good or a bad thing, but I do know that PR could really take some time to sure up its storylines a little more. But then again, I think I've been saying that for years now.

Mah-Jing loses and it's honestly the only realistic choice. He hasn't been long for this world for awhile now, but as everyone's quick to point out, it's kind of amazing he even made it this far so cheers. It's been pointed out in the comments that it's hard to really be excited for the talent level this season. Of the five contestants left, the only person who consistently makes you get up out of your seat is Laurence. While, on the one hand, I think that makes her a shoe in for the win this season, it also makes for an interesting situation in which everyone else is pretty evenly matched. Whether that makes you excited for the show at NYFW or just bored with it is a personal choice. For my money, I'm assuming there won't necessarily be a bad collection this year, and that's kind of exciting.

--I hope everyone had an amazing Thanksgiving! I celebrated it with friends in Italy (a few days in Rome and then the last bit, including the holiday, in Florence) and it was fantastic! Trying to cobble together Thanksgiving day ingredients from Italian markets when you don't speak the language was a lot of fun, and dinner actually turned out perfect. I wish I had just stayed there, but here I am, ready to keep writing for you guys.

--Allow me to be clear when I say I don't think there will be a bad collection at NYFW it's because I expect Cornelius to go home next week. I may not love Erin and Roberi's aesthetics, but I do trust them to put out solid and interesting collections.

--The Mood section of the episode is heavy on the Swatch and that's always the right choice. I like it when he's all rambunctious and adorable.

--Mah-Jing is a sweetheart, but I couldn't have been the only person thinking they wished he'd just shut the fuck up and go home already. He has more to say on the runway and in the greenroom after being auf'd than anyone in the history of the show.

--I think I saw the first preview of Project Runway JR this week, and I couldn't be more excited.
Posted by Unknown at 8:59 AM