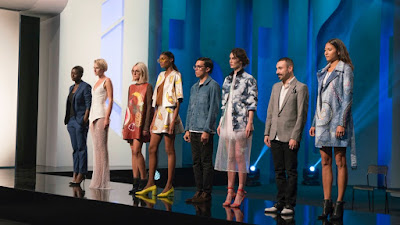 At one point in the beginning of the episode, Tim says "You're not only great designers, you're wonderful people." While I certainly agree with him, there's a part of me that's wondering whether or not that's the core problem with this season as a whole. Don't get me wrong, I enjoyed this season more than I disliked it. But it wasn't PR at its best, but I think we've seen worse seasons as well. If there was one consistent failing this season it was just how boring the contests were. Cornelius and Dexter had a little tat for awhile there, but nothing big came of it. I never thought I'd say this but maybe the season would have been a little better if everyone hadn't been such wonderful people.

But that lacking doesn't detract from the bigger problem from episode to episode: continued questionable format. It's more glaring here than even in past episode since this year's finale is kicked up to a full two hours instead of the requisite 90 minutes. And how do they fill that extra half hour? With retrospectives on everyone's PR journey. Their high points and low points, struggles and triumphs are all laid bare. It's cute and nostalgic to a certain point, but it never feels like more than what it is: a quick way to fill time.

Watching the entire episode made you realize just how much time they did need to fill though. Nothing dramatic happens prior to the runway. Everyone gets an extra $500 to spend at Mood, and the same amount of very little to no time. Some mixing and matching happens, a couple people turn out an entirely new look, but that's about it. Prior to the runway, a rip shows up in one of Laurence's dresses and one of Roberi's model chooses not to show up. Laurence sews up the rip and Roberi's replacement model doesn't stand out at all, so it doesn't seem to be any big deal.

Rik: Rik's collection is good, and it progresses very well and seamlessly from one kind of look to the next and then into his final look which brings it back around in a fun way, but nothing about it is breathtaking. Well made, and a fun concept, sure, but did anything make you double take or jump out of your seat with excitement? He's a designer that deserves to be seen and shown and sold, but nothing he did here makes me think he's ready to win or put on a great show. His stand out pieces are probably the two swim suit pieces, and the bikini is easily better than anything we saw from him last time. Sexing it all up was the best way to go. It's cute and fun and cohesive but it's not a winner.

Laurence: Did I expect a little more from her? Maybe. But I still think there's more good than bad here. I think the collection takes a dip when you get to the white pieces. The first isn't as strong as some of what came before. And while the second white look is still a standout, it's sadly not all up hill from there. However, that's not to say that there still weren't standout moments from this point in the collection as well. Her final look is one I think I might be in the minority on, but I love it! I think it's sexy and fun. Everything from her is impeccably well made and it all looks high end. Even the suspenders look that the judges hated has been edited in a manner that makes it look like high fashion. The dip in quality towards the middle is a mark against her, but there were some stunning moments in this collection that I can't help but to love.

Roberi: Roberi's aesthetic has never been my favorite. He has a very unique point of view and I commend him for it, but I'm just not sure how it translates to fashion. In the end, I think he has some very nice clothes here, but very little in the way of impressive fashion. The looks that stood out to me did so because of how different they were from the rest. His collection ends up being cohesive, but I can't help but to wonder how much of that is because so much of it is nearly identical. It's all nice, but I think it could have been more impressive.

Erin: Wow! When she says that her collection is different from everyone else's, she isn't lying. It's really fun and youthful without being immature. And the suspender style straps on those first few dresses are to die for. There's something here that's innovative and you can see that she, more than any of the others, is thinking of ways to take common elements and flip them on their head and create something new and surprising out of them. I still hate the neoprene dress which I think looks lazy, but most of everything else in her collection was fun and interesting. I hate her, but good lord that was a great collection.

It's interesting to me just how much more the judges liked Rik's first look than I did. I thought it was fine, but it still felt like a simple black dress in a lot of ways to me. But Zac's comments about it being contemporary and powerful make sense. Zac wishes he had bedazzled the denim looks a little more and done something more memorable and I agree. The complaint I had that he didn't put on enough of a show seems to be what Zac is hinting about. Everyone commending his cohesion is spot on though. He really did find a way to pull it all together.

Heidi says that she was more wowed by Roberi's collection. I certainly wasn't, but to each her own. She doesn't love his final look, and I agree. It didn't feel like it went as well. Nina liked his denim look which was also my favorite from his collection. The jackets are getting most of the love from the judges, and I can see why, but I did feel as though the jackets were lessened by the dresses I didn't love.

Zac commends Erin's use of color but points out that certain elements of her collection are always a little lacking in their construction. Heidi points out how much fun the collection is, and Nina points out how feminine her collection is. It's interesting to me that Nina complains about the first dress, and yet I loved it. Not so much the skirt, which was just fine, but the top was breathtaking.

The judges are not as impressed with Laurence's collection as I had hoped they would be. I think at the end of the day the general feeling is that in going away from a lot of what she did all season she lost something of herself. Her grand showmanship. I noted this last week when pointing out that she should have had at least one black look that was just classic Laurence. Here they wanted more wow moments and something to just push the envelope a little farther. Nina points to the pleated skirt as a low point for her and I couldn't agree more. The hard part is we all know she could have gone bigger and bolder and left you wowed, but she chose not to and it's hard to see.

It's interesting that the top two collections end up being Erin and Roberi's, the two most colorful collections on the runway. Erin wins, and I can't complain about that after seeing all of the collections, but will she go down in the annals of PR history? I think she stood out in this season and from these final collections, but I don't think she's the best designer we've ever seen on the show. I don't think she's the best designer we saw this season, but Laurence over thought her final collection and paid the price for it. And so Project Runway's 15th season ends in a whimper more than a boom. I expect next year to be more of the same, but I'll be here nonetheless.
Posted by Unknown at 1:51 PM