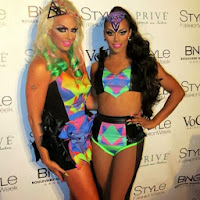 At the risk of going all TLo on you readers, I just wanted to show this total WTF show coming out of LA's Fashion week.

If you don't know who Marco Marco is, he's a fashion designer who normally designs for pop culture icons (think Nicki Minaj and Katy Perry).  Apparently he will be coming out with a line of men's underwear (borderline NSFW), and had a show in LA's fashion week to introduce that, as well as his line of women's clothes.

The result is batshit crazy.  I'm not joking at all.  Drag queens (largely from RuPaul's Drag Race) and male models in high heels.  It's just...wow.  It's the modern equivalent of the 80s, and we'll all be laughing in 10 years.  I mean, that's the LA scene, right?  But, for now, I highly recommend searing your eyeballs on this (probably NSFW) wonder show of wow.

Posted by Julius Kassendorf at 2:00 PM