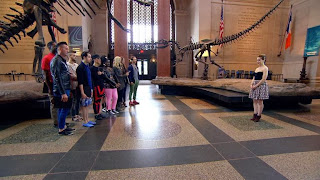 Ok, guys. This is it. We got all of those silly introductions out of the way, and we only have 60 minutes (minus commercials) to get through the episode. Let's get down to business. Challenge, sewing, drama, models, makeup, runway. Let's make it snappy, people!

Ok, Melissa saying that the competition is crazy hard. Well, that's the usual Project Runway thing. But, within 2 minutes we're already inside the New York Museum of Natural History. Yay, we're through the product placement within the 3rd minute. And, we've even gotten Curly Moustache Guy saying "I'm going home" "I'm from Texas."

The challenge? To create, in one day, an avant garde look based on an insect, or arachnid. Today, I learned that a scorpion is actually an arachnid.  I was going to be all snarky and "scorpions aren't arachnids or insects, silly Project Runway." But, I had to double check because I hate biology, and they are arachnids!  *the more you know*

While typing all that up, we're already 8 minutes into the episode, and we're in the work room.  Jeez this episode is going so fas...wait...

We have time to fawn over work room.  With Mychael Knight commenting to us such mind-boggling information as "It's bigger than Mood" and "I love the colors." Or, Christopher Palu helpfully adding "Our tables are all set up. There's a sewing room that's attached. It's really nice." We see that the walls are done in a shade of blue-purple that has been dubbed, on Wiki at least, as either Pomp and Power or Dark Pastel Purple. But, really, its almost a grey.  And, the stripes don't help it.

We're also introduced to the QVC accessory wall that Viktor describes as "AMAZING. There's necklace, cuffs, bags, shoes..." Probably also belts, earrings, hair pieces...  You know, accessories!  And, he finishes with "Anything a girl would like" and then makes a hand motion around his neck that makes me think he has confused a girl with an octopus. No, Viktor, girls have boobs, not neck tentacles.

Korto is still on her "Why the fuck am I here" rant.  She comments, "I got to go back to Africa, and design for their President as well as Vanessa Williams, Miss Universe, Estelle, Serena Lopez...Mama's not done, and yet I'm here?!!? Jesus fuck why did you guys bring me back here. Assholes."

So, 10 minutes in (and no commercials!), we're actually at the design...until Elena freaks out and has sweaty armpits. But, nobody gives a shit, really. "Drama, please?  Did you even see ToKen last season? You'll have to do better than having moist armpits." And, then we get to actually look at a bit of the design and tension. We get lots of shots of people cutting, and pinning, and expressing frustrations. Viktor zings us with "I'm about to turn into Elena," and is edit punctuated by Elena doing her best Gene Simmons impression. *zing!* And, NeckTat gives us this episode's next round of name droppings saying he used to design for Marilyn Manson.

Zanna Roberts Rossi comes in and breathlessly explains that avant garde means "pushing boundraries, experimental, innovative, and super daring."  Take note. This is important. But, then Zanna speeds through everybody's critique. My favorite comment is to NeckTat, "You have a LOT of ideas." And, then to Korto, "This is pants and a jacket. How is this gonna win the challenge?"  And, she finished up with "this is really not avant garde enough. From all of you."  Note this. This is important.

Two people re-design based on Zanna's commentary. The first is Michael, who had gone completely Green, and decided to flip it and go into neutral grey with green highlights. The second is Melissa, who decided to second guess her whole outfit...but doesn't change anything?

Elena decides to lose it for the rest of the episode. Screaming, walking, crying, everything. She took the crazy challenge, and she kind of nails it without being all angry aggressive.  Somebody, give this woman a medal. We need more of her self-inflicted-psychosis high drama, and less of the angry at other people drama. I mean, she goes screaming through the sewing room, through the work room, crying the next day while finishing her dress.  It's an amazing performance, and she manages to do it without yelling at anybody. She even gets her model AND Viktor to help her finish her dress. Good job.

Special Guest judge #1: accessory designer Jennifer Meyer who turned Katie Holmes, Emma Stone and Jennifer Aniston into loyal clients. Please note that at least Katie Holmes is wearing a necklace. That is the only visible accessory in the name dropping client picture collection.

And, remember how I pointed out the definitions of avant garde, well Alyssa Milano really hammers it home by saying, "we're looking for something really unique."

Mychael: It's a cute grey neoprene dress with a cute shawl that has some interesting cuts to it that make it green. There's nothing strange about the dress. It's a little ultra-modern.

CMG: An interesting brown dress with a bizarre neckline that is strangling his model. It looks somewhat cheap, but he did it with $250 and in one day. It at least is risky.

NeckTat: It's like Rorschach decided to go on a bender and ended up with a lampshade on his head, only it was too big and ended on his shoulders.  It's strange, and it's avant garde evoking war imagery and violence. I love it and hate it, which means I think it is the most interesting piece so far.

STOP
So, up until now, it's been amateur hour.  Everything has been kind of interesting, but ultimately really snoozy. Suddenly...the runway becomes a different show.

Viktor: An strange avant garde super hero gown that looks like it may have been a costume out of Batman and Robin. It's sort of Poison Ivy if she had been white and green instead of red and green. It definitely borders costume, but it is interesting.

Palu: It's high fashion from the 1990s vision of 2050. It's boxy and techy looking. It's interesting but expected.

Irina: Gothy avant garde that reflects the darkness of her soul. It's pointy, sharp, black, gothic with runway styling and dramatic, and everything that avant garde should be taken to a dark dark place. I love the fuck out of this look.

Elena: She makes an alien androgynous, edgy look that is hard and feminine and looks like its from a rock show.

And, then we get Alyssa being a sly little minx and calling people in 3s and 2s. First three names, then "you will be critiqued." Then two names and "you will be safe." Repeat. *wink*

But, the judging goes weird. Irina, Elena, and Mychael are on the top. CMG, NeckTat, and Melissa are on the bottom.  The criticisms for NeckTat, in particular, are almost their own Rorschach test. Isaac thinks the woman should be able to drink a martini. Anya thinks it is a backup dancer look. Georgina says the lampshade looks clumsy (correct). Alyssa thinks that the hood was appropriate for the bedroom *cracks whip*.

And, they loved Mychael's conventionally unconventional look. They liked how it looked expensive. Mychael won, and CMG loses (based on his taste level).  Seriously?  Melissa's boring-ass look doesn't lose over CMG's cheap-looking insect dress?  And, this is where we are with judging...

- CMG: "I have butterflies in my stomach." *psst, Daniel. Butterflies were last season. You didn't happen to eat their butterflies, did you?*

- Viktor: "It looks like it's from the planet Elenus." *Non-zing ZING!*

- Alyssa Milano: "Bye." How cold and impersonal compared to Heidi's "Auf Weiderschoen!" Have a heart, girl.
Posted by Julius Kassendorf at 6:43 PM