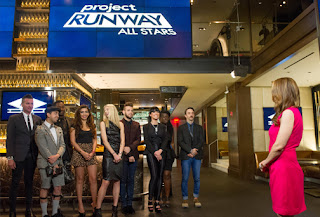 And, so, this episode begins with a lie and then a slap in the face. Apparently, Isaac Mizrahi was one week off with his critique. When he said "This is a slap in the face to the woman wearing this dress. What if she wanted to drink a martini??" he really thought we were in the martini challenge, you guys. Not really, but it was a complete slap in the face to jump from the worst criticism ever to a challenge that totally embodies that criticism.

Which totally mirrors how I experienced this episode. I had just caught up with The Daily Show's Wednesday critique of Jay Z losing his street cred by sticking with Barney's over arresting the kid who paid for the $350 belt because the kid was black. And, then I'm faced with today's product marketing where the designers get stuck in Jay Z's 40/40 club, which has a hot white bartender, and boring, probably expensive, drinks.

OK, the 40/40 drinks are not totally boring, but they are just pseudo-classic "artisanal" drinks (read hipster drinks) made with cheap liquor. For instance, on a freeze frame of Korto's drink, Summer, the vodka they use is Stolichanya.  Which...*SCREAM* If you'll indulge me for a brief few paragraphs, I'm going to get a little political on you.  Feel free to skip.

Starting in July, the gays decided to dump Stoli and any Russian vodka. We banned it from many of our bars. We banned it from our homes, and it is surely not going to pass in our gay-themed shows without comment. The ban on Stoli probably started a couple weeks after this episode was aired, so I'm not going to get all activisty "ZOMG, Project Runway is sponsoring Russian vodka and is an enemy of the gays."  But, I will tell you that this is a reaction to Putin's anti-gay policies, and the level of violence that is escalating in Russia over the past year. Among his policies are a ban on gay "propaganda" which can include kissing or holding hands in the street.

The reason this is significant is that us gays love to drink. And, I mean...we LOVE to drink. And, we drink a LOT of vodka. When I went to an Oscar fundraiser, they ran out of vodka a couple hours into the show.  So, us dumping one brand of vodka is kind of significant, especially given the popularity of Stoli and its flavored vodkas. Now, I'm not saying that my readers are necessarily pro-gay, but if you're watching Project Runway I kind of have to assume you have a mild tolerance of us. And, especially in this comment section...which is like whoa. Anyways, I just needed to take that paragraph or two to say that...back to the show.

So, we're at the stupid Jay Z club, and we're being served pseudo-artisanal cocktails made by a generically hot white guy, Yusef. The cocktails has a mix of names from Spotted Plum to Summer to Tiger Eye.  Some of the names you kind of expect to be generic looking, like the Hemingway which I would imagine would look something like an Old Fashioned. But, a Tiger Eye I would hope would have something like a complicated layered drink effect. But, no. These are all just shaker drinks. And, the Tiger Eye is pale celery color. Now what I would think of as a Tiger Eye. The only interesting one is Seth Aaron's Hemingway which had a huge chunk of orange peel.

And, so, these boring-looking drinks serve as the inspiration for this week's cocktail dress challenge. Fuck I need a drink.

The next morning - wait...they closed down the 40/40 club for the shooting of the intro?  Or, did they get kicked out in an hour and go to bed early?  I'm so confused - our intrepid designers hit mood with a fresh $100 in their pockets to make a fancy cocktail dress. $100 is not much based on previous episodes. And, with the lower budget we get some interesting choices, like Pansear choosing curtains. Or, Korto's decision to go with a loud plaid-esque green print.

And, this episode is actually really nicely heavy on the construction details. I love this aspect of All-Stars. I like watching Viktor start to deconstruct his gorgeous cathedral print by making patterns based in part on the architecture and the gables is a fascinating insight. I like listening to Necktat's inspiration of Vietnamese dresses from the basis of his drink having passion fruit.

But, my favorite part is Pansear's debate on how to make a dress with a sheer non-fabric without showing off vagina and nipples. He created a wrap, but it got heavy and tableclothy. Then he started double layering nude chiffon under the curtain fabric.

My second favorite is Korto.  "ALL MY FANS..." Yeah yeah, we're sorry for bring you back, Korto. But, she's not going with the color of the cocktail which she describes as "dingy, mudgly kind of dream."  And, she's not going safe because "the safe house is locked up and she lost the key."

This episode also focuses on how everybody is trainspotting. Necktat says that Korto's dress is trainspotting Isaac's 2011 summer line. Pansear says that Melissa (who is so boring I can't even think up a defining characteristic) is trainspotting herself. Elena says that Viktor trainspotted Alexander McQueen. And, this is completely hilarious because apparently, in an edited out comment - according to somebody on the TWOP forums and brought out in reddit - Anya called out Necktat for trainspotting Martin Margiela (thanks for the tip, Origami Rose (the user, but probably not Venbot).

And, then we get the twist.  Dudes, really?!  We're in a 60-minute episode. Zanna Roberts Rossi decides to throw in an accessory challenge.  *sigh* No, Zanna. That was PR's other spinoff, Project Accessory. *sigh* What the hell?! The audience doesn't care about the accessory, and neither does anybody else. All it does is serve to fill in the run time and make everybody panic.  Boooooo. We don't care.

Soo, after making a bunch of shitty looking accessories, we're off to runway! This week's judges are NOT ANYA!  But, really, its accessory designer Rebecca Minkoff, and interior designer Nate Berkus. It should not be noted that Berkus' appearance was probably in anticipation of a new series that so far has not been aired, nor had a date set for it.

Runway:
Irina: Garish. It's like Jay Z's nightclub vomited onto the dress. It is gold and silver, but it is garishly patterned, almost like linoleum. That and its cheap plastic sheen makes it looks trashy and hideous. It's very bling bling gone wrong.

Pansear: Elegant, classic, and timeless. Sort of like a flapper dress but with jewels on the back which brings it into the Jay Z bling bling land. It's gorgeously nude, and I am in love.

Mychael: HELP! His model was caught in a shredder! And, the dress won!

Elena: It's way too long for a cocktail dress, and reads like futuristic officewear to me. Sort of the type of outfit, one would find in a Heinlein sci-fi novel/erotic fantasy (which, really, are the same thing).

Melissa: It's the awful version of her old dresses...only more floppy with a weird yellow callout in the small of her back. "She would go to a cocktail party, and many girls would stop to ask her what she was wearing." - Melissa.  I agree. "What ARE you wearing, darling?"

Korto: No. It's a weird dress that looks like it had a baby with a weightlifting belt, a back brace and a fetish harness. Even without the gigantic belt, it looks stupid.

Zinger: A gorgeous dress with a trampy slit at her hoo-ha.  I'm going to say it again. HOO HA!

Anyways, Alyssa is using Project Runway to fill her closet. Never mind that the winning designs are sometimes auctioned off. Alyssa wants it.  Fuck you if you wanted it, she's the host, and she'll beat you down while wearing her executioner hood if you try to challenge her for it.

Most of the judging is reasonable. Especially Nate Berkus, who tells Elena that she's trainspotting Balenciaga and Narciso. Elena, Pansear and Zinger are in the top three (all justifiably). Necktat, Melissa and Korto are in the bottom. I would have switched Necktat for Irina, but you know...   Of course, Isaac has to have his absurd fixation of the episode with Pansear's dress back, which is wrong. It's what brought the dress into the now. And, he's probably the reason that Pansear wasn't the official winner for making a flawless dress. But, both Pansear and Zinger's dress end up in Alyssa's closet, while Melissa goes home for her mess of a dress.

Stray Observations:
- Viktor "We're walking to the 40/40 club and I've never been there and I'm like OMG, today's the fir*squeal*."  Closed captions tell me that he said "first day" but I don't believe it.

- Pansear: "I'm a homosexual. I would not want to see hoo-ha." I am really glad hoo-ha is still a nickname for va-jay-jay.

- Alyssa Milano's TMI of the Week: "I have too much back fat."
Posted by Julius Kassendorf at 7:45 PM