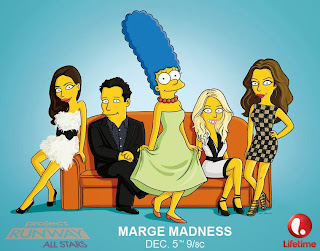 And so it’s come to this. We are no longer designing fashion. We’re designing for a cartoon character. Which is fitting considering how much of Project Runway is actually a cartoon. Especially last season with its outsized personalities and big, boisterous, fights that could only have been accentuated by the use of Acme products that backfired. Oh, to have seen an Acme sewing machine sew up Captain Sassypants’ mouth shut.

Side tracked. Anyways, in a move that’s truly unprecedented, we get…a product placement!!  This week’s product placement is The Simpsons, and the designers have to make a dress for Marge to go on a dinner date with Homer. Now, if you’re like me, you know that she’s periodically had formalwear, and there was even a whole episode Scenes from the Class Struggle in Springfield which centered around Marge finding an amazing power suite in an outlet mall store, and modifying it to hobnob with the rich and famous. She toiled every night working over the sewing machine to make a new outfit for the next day out of this one. Marge was the original Project Runway seamstress.

Marge makes an appearance to give the story and rules.
1) This is a dinner date with waiter service. So, formal/fancy.
2) This needs to be sexy for snuggling afterwards.
3) No green
4) Easy for a drunk Homer to remove (SERIOUSLY?!!?)
5) Use accessories from the “Who’s ever sponsoring the wall now wall.” OK, Simpsons. You get points for that.

Now, one would immediately think simple-ish, formal, not crazy patterns, and yellow skin. Also, no pink power suits because that’s been done. Probably also not a State of Florida costume. Though, admittedly, I would love that costume on this show.  Elena’s idea is a super low cut red dress with a formal blazer. Irina has an idea for a purple tube dress with an elegant tutu. Both of these ideas are fantastic for cartoons, as they’re simple but allow movement.

This whole concept confuses the fuck out of most of the other designers.  Necktat has an idea for a long purple dress with a bunch of purple roses snaking down the front. Note, at Mood, Necktat buys like 10 fabrics because he’s freaking out. Korto designs a version of a sexy but conservative asymmetric little black dress. Pansear wants to do a summer dress that we’ve seen 100000 times. Seth Aaron’s dress idea is to make a graphic dress with purple and black barbershop pole lines. Gawth boy.

And, when I say that it confuses the fuck out of people, I mean everybody is challenged. Pansear starts panicking about his design and questioning but slowly plodding his way to the final dress. I do mean plodding because he overworks a dress that most designers have done in 10 minutes. Seth Aaron says “I’m fucking lost” and over the course of the episode, he starts and works to a decent part of 6 different dress designs. Irina can’t figure out how to drape anything. Necktat designs 2 different dresses, and both are rather boring.

Zanna Roberts Rossi comes in and starts doling out the worst advice ever. “It’s date night at a restaurant. You don’t want to go too futuristic.” “I’ve seen this one hundred million zillion times. I’m going to let you mull that over for a bit.” “You need to think about how this looks on the runway.” “Think of her not as a cartoon character but as a real housewife around age 40. I don’t know how many of them are wearing polka dots.”

She doesn’t actively criticize Viktor’s trainwreck which looks like a formal version of punk. I think Elena’s spirit has possessed Viktor in a weird edition of The Exorcist. Pansear has already started 2 dresses. Seth Aaron is on Design 3 by now. But, considering all of her advice, Zanna is getting increasingly useless, in my opinion.

We also have a little drama between Pansear and Viktor because Viktor is hurt that Pansear didn’t help him as much during the team challenge. And then Viktor apologizes. And it seems like he means it. And Pansear accepts. You guys! This is All-Stars drama. People acting like human beings. Solving their problems not by yelling at each other, but by talking it out, apologizing and moving on. Project Runway, I am proud. You’re starting to grow up. *tearing up*

During the model fittings, we start to see what Irina has designed. And, oh lord. It’s a cupcake tent. Maybe I’ll be wrong. But, her dress was going so wrong so fast. And, it never really recovered. Necktat called it “a gigantic nightie.” And, he’s not wrong. At all.

Guest judges are Anthony Ryan (who we’ll get to in a minute), Abigail Breslin (who is looking kind of hot now),  and Stacey Bendet (who designs for some line called Alice + Olivia…I don’t even).  Back to Anthony Ryan Auld. He makes it hard not to mock him. I can’t mock him for being bald or gaining weight, because he was dealing with testicular cancer. And, that needs to be acknowledged. But, then he painted a gigantic black stripe on his head? And, wearing above-the-knee shorts? I don’t even know what the hell you’re doing by styling yourself that way. And a blue suit jacket with your skin tone?! No. Go home and put on clothing that looks good on you, and wash that damned stripe off your head.

Runway:
Korto: Slink, shiny and sexy. It looks like Korto would wear that dress. Sure it looks like a slightly tweaked version of a black dress we’ve seen 100 times, and Marge may have even worn a dress similar to it at one point, but it’s a good basic look.

Pansear: He created a summer dress with a ball of fabric on it. Pansear had a lot of fabric and bought too much, so he just kind of bundled it all up on the side. Add in a belt, and it made a good maternity look.

Necktat: You gave us a split open vagina with a sloppy long pearl necklace. NO. NONONO.  That is a fucking ugly perverse joke of a dress.  What the fuck is wrong with you?!

Irina: Nope. It’s a cupcake. And, if you note, it also has this trail of glitter going down the front like Marge spilled glitter on herself. Totally stolen from Necktat’s initial drawing. It’s an eyesore.

Viktor: Faux punk. I have “expensive hooker” written on my card.

Seth Aaron: “It’s a perfectly beautiful gown that sells at every store across America.” – Seth Aaron. Couldn’t have said it better myself. Only not as a self-promoting compliment.

Elena: Red simple dress, elegantly made, with one of the most amazing slightly masculine art deco blazers you could ever want. It was a gorgeous gorgeous piece that would read amazingly as a cartoon. I am in love with this outfit. And, it recalls the business suit episode without being a direct copy.

Judging is weird. Everybody except Stacey fawns over Irina’s outfit. Nobody comments on the vagina in Necktat’s outfit, though Stacey focuses on the ugly ass shoes. Somehow Elena doesn’t win. Even worse, Irina does win. But, what do we expect with this fucking show? Though, finally, Necktat is out.

Ed’s note: Apologies for being distant these past few weeks. I've been planning a trip during December. And, thus, I’m looking for guest reviewers for the rest of the month of December. Please e-mail me at Julius.Kassendorf@yahoo.com if you want to review.

- Elena: “Keep it simple.” Cut to confessional where she’s wearing some sort of obnoxious-ly printed shirt with pink straps and a flowers…and a floral bra with thick white straps.

- Pansear to Viktor: “Don’t you think it’s too tea?” *drinks with extended pinky to show he thinks it’s a bit casual and a bit gay*
Viktor: *missing the mark* No! It has movement.”
Pansear: *glares with intent*(you totally missed what I was saying)
Viktor : *firm look* (No, I got it. I just am not giving you the upper hand, bitch.)
Pansear: *look of bewilderment*