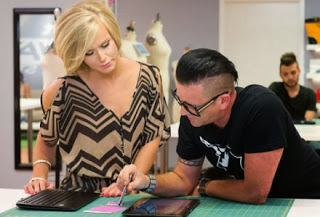 In fashion, it's not about following the trends, it is about setting them. This week, our intrepid designers are asked to look into their Swarovski crystal balls and design a garment that will capture what is new and happening next year. As the last challenge resulted in a gown that will be sold next year, we could say that they have already ticked this box (surely we will all be wearing Korto's taupe and orange post-Sochi?)

Now, few people would say that I, MediaGrrl, am a fashion trendsetter, but what do you know, here comes Alyssa wearing a blouse and denim skirt combo I wore to many a Chicago bar in the late 90s, showing all the world not only her tasteful, ladylike side, but also the reason I went home alone most nights.  Alyssa wants to know how this thing we call All Stars compares to their own seasons. If she wanted some behind the scenes dirt or even amusing whining, she gets nothing. The designers mumble something about, well, you know, it not being the first time. its actually easier, so...

Enough! Challenge time! Who better then to be the hand-feeder of the details, and guest judge, but the arbiter of style and questioner of taste levels, Nina Garcia. Yay, Nina's back. Now, judging the final looks is a deadly serious business, but this handing out the assignment - not so much. No need to show up completely sober. Nina seems to have come from a three martini lunch (or, as they say on 30 Rock, she's business drunk), gives Alyssa a big hug (I really love you, Lyssa Merano), and tosses the chunks of challenge meat to the hungry design tigers.

Bloggers - the biggest influence in the fashion industry (note: surely it is tv recap bloggers?), the voice of the people, like Gretchen once proclaimed of herself, a force to be reckoned with, and the convenient satisfier of this year's "real women" challenge. PR:AS has flown in five of the best from all over the  world. Sort of like the A-Team, if everyone was Faceman and BA was not a chronic over-accessorizer. See, in a weird twist, all of them are gorgeous. No lumpy bridesmaid or dumpy mother to tent up this season. Extensions glued in and glottal frys set to "psyched", one aspiring Garcianista will jet off to Belgium with Nina to shoot a video with the winning look. This will not appear in or on Marie Claire, oh no, but on the front page of a fashion blog-blog called Style Hall, an agreement Nina clearly inked after the fourth on-an-empty-stomach cocktail, and let's just say, it is a good thing Joanna Coles isn't around to see this moonlighting. You might remember, Joanna had the power to crush Nina like a little bug, but now she is off supervising astrology-based sex quizzes and staring down interns for the gals at Cosmo.

Pantone is sponsoring this challenge, even putting up the winners at the Pantone hotel (who knew) to publicize the color of the year, 2014, which is.... no, not black, Elena... Radiant Orchid! Write that one down for the next time you shop, Radiant Orchid. What Pottery Barn sage green and my short denim skirts were to the 90s, Radiant Orchid will be to the nows. Or the almost nows.

The designers return to the workroom and select their bloggers. Korto goes with Carli from New Jersey. Christopher gets Fleur from London, the one in England, whom he describes as having an easy, breezy (catches himself dangerously close to Maybelline territory) natural beauty. Seth Aaron takes Gigi from Toronto because he feels she has ADD, like him, and she is lively and stunning and the tallest of the bunch. Elena and Viktor take the interchangeable Dulce from Los Angeles, and Jarmaine, who is also from Los Angeles. Weird - what are the odds that two mermaid-haired brunettes in the greater LA area would have the inclination to create blogs devoted to putting on makeup, showing off makeup and scoring free makeup (JlovesMAC, anyone?) and lure in innocent designers by appearing adorably in the shower and asking sexually charged questions like: "do you remember this vest of mine?"  Yeah you do, Zinger. Yeah you do.


So our remaining five come up (now) with a trend prediction (future) that features a color that Pantone has decided (now) will be the color of the (future).  If you follow.

Zinger forecasts: creating your own textile

In a last minute change of plan, he creates a 50s flirty circle-skirted dress in black Neoprene over the Radial Ochre. To mix it up, he adds a great looking white biker jacket, with a zipper in matching RO. Cute look. Zinger says the jacket is "a staple from the 50s but I feels that in 2014 is not going to changes" .  What does that even mean?  I think... I may have caught what Nina has.
Nina calls him out for being too soon, and Isaac underlines the fact that she is 100% right. Bottom three.

This is styled like a catalog look, one where the bottom or inner garments are completely plain, so they fade into the background and showcase the item for sale. Here we get a nondescript black skirt paired with the featured item, a big, collarless jacket that is appliqued (?) with geometric stripes. I can't make my mind up on the tweedy, beribboned, peplumed  jacket. I know I don't care for it on the model, who is vertically challenged.  Part of me likes the originality of it and the combo of colors, part of me thinks it belongs at a fundraising tea. Here's to the Ladies Who Lunch. (I'll drink to that, Nina.) Elena doesn't quite get the idea that a peplum cuts her tiny blogger in half, but she does rock lipstick in the color of the year, Radon Oprah.

I almost always like SA's looks, and this is no exception. He also receives props from Nina for the best use of the color, but the dress, while beautiful, flawlessly made and wearable, even for the everyday woman or person without curves, like Gigi, it doesn't have quite the wow SA is capable of.

This is a great look. Crisp clean white, nicely cut vest top with almost a fan-pleated effect, lined in Redundant Orca. We can question the shoes and the clutch (both cool, but perhaps not with this look) but this is the clear winner.

As with most Christopher creations, his sketch was so much better than the finished product. The color choice takes the original idea from a bright teal green, which popped against the RO, to a faded olive, which simply clashes. The lace overlay looks forced, and his description of "soft military" seems to come from not being able to find the cloth he wanted at Mood. Nina no likey. It does bring us to this odd exchange:

Nina: it looks like seaweed that has come out of the swamp.
Pansear: Thank you.
Nina: That's not a compliment
Pansear: I didn't take it as one.

The judges scramble to find any sort of competition to give us drama for the 1st place prize, but we all know it will be Korto's blogger flying off to Belgium to eat Panetone, use Pantene, stay at the Pantone hotel.

Viktor is sent to pack his fans. All Stars has lost its zing.

In watching the opening credits, I had forgotten Daniel was on the show

Elena  is pissed that everyone is stealing her Neoprene fashion ideas

Alyssa  shows why she was the go-to under 12 actress for Movies of the Week about divorce: "Nina, can you stay for always?"

Christian Soriano is correct: over-design is a tough sell

Korto's girl predicted a victory "in the name of Jesus, Amen." Take that, panel of judges.
Posted by MediaGrrl at 10:04 AM