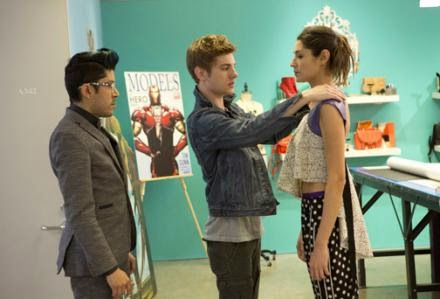 OK fellow readers, here we are! We're almost done with this season's set of episodes. We're down to four, and after tonight, we'll be down to three. Hopefully, Asha will be gone, but it could be Sam. I remember that all three were in the finale clip we saw at the beginning of the season, so those are the only two possible outcomes, right? Right?

It's been a long season. The premiere was in 2 separate 90-minute blocks. There was an episode where we didn't have an elimination. We started off episode 3 with 12 designers, have knocked off 8 of them, and here we are.  *sigh*

I'm gonna be blunt. I'm finding it hard to get behind most of the designers this week. I know you are too. I'm rallying against Asha, but even that just seems unworthy of my energy. Maybe I'm having a Project Runway meltdown.

Speaking of meltdown, today we go to Meltdown Comics where the Marvel juggernaut can get in some free advertising for whatever superhero movie is coming out this week, as well as their comic books. And, it's also advertising for a Tim Gunn edition of Iron Man. But, really, it's all about Marvel because god forbid anybody read or learn about any of the independent geeky comic labels that exist, like Fantagraphics (Seattle!), Dark Horse, or Image.

Anyways, we're introduced to the VP of Animation, Cort Lane...which...um...hot! Well, except for his hair. Cort, you're really hot, but you're soooo fucking WeHo. Does he bleach his hair? It looks like it in other photos. He's a hot cub, I just want hot cubs to not have be so affected by the shallow WeHo standards, which are so plastic and unsexy it's not even funny. Still, I'd not kick him out of bed. Maybe he could replace Mondo for a week so I can gaze at he all episode.

The goal this week is to pick one of four superheroes and to make a female outfit inspired by these superheroes, without going to costume. Oscar chooses Gamora, the most dangerous woman in the universe. Asha chooses Falcon, the first African-American superhero. Sam chooses Hawkeye, a rebel. And, Shan chooses Captain Marvel, formerly Ms Marvel, a strong woman or something. Why, yes, Marvel does have a couple of female superheroes...apparently. Just because Gamora is a side or group character in most of her comics, doesn't mean she doesn't count! Shut up!

The main thrust of this week's drama is Sam and Shan centric. Sam gets stuck in a gloomy depressed place because he's been all alone and under pressure for a month, and now that he's in the final four, he knows that it's time to let his drama fly so he can be in the final three! First he chooses Hawkeye because he's a rebel. Then, he starts reading the Hawkeye comic book and sulking in the green room so everybody can see him sulking in the background. Then he opens up about being teased on the bus as a kid...which was so done last season. "Just like what every gay kid has to go through." And, then, at the end of the episode, he talks about his suicide attempts! WAY TO GO SAM!

Sorry if I sound a bit cynical, but, throughout the episode, he hit a lot of different buttons. Not that it's not a typical story of gay people around the world, but it seemed rather calculated compared to other reveals. Especially given what he eventually ends up with.  But, we'll get to that when the time is right...

Shan is also feeling lonely, but he constantly reminds us that YES, Shan is straight, and YES, Shan is married with three kids. Stop thinking he's gay! He's very married, thank you. Oscar also wants some drama time, but his attempts at creating drama is so half-assed compared to bullying and suicide. Oscar only has semi-low confidence due to a bad critique last week. I have to say, I respect his trying not to fabricate drama to save his ass. Asha saved her ass by throwing Natalia under the bus a couple weeks ago, so she doesn't need to be the star of this week. And, yes, I'm still bitter about that.

Sam's design has been waylaid by his day-long depression, so he only has a variety of fabrics to show with an explanation of what he's doing. He has a LOT of fabrics. A LOT. Purple, and polka-dot, and another patterns, and another color and things are color blocked and...it's all confused. But, because we have to walk on eggshells with Mondo and his positivity, Tim tells him that this is SMASHING, and that's in a good way. By the time we get to the model fitting, his whole top is completely confused. There's purple underneath a black and white hash pattern with a thick black shoulder strap. It's like the 80s got drunk and vomited all over the 90s. And, to add to it, he gives his model an afro, adding in the 1970s.

We finally boogie down to the runway. This week's special guest judge is Jaime Alexander, a co-star of Thor 2. See! There are females in Marvel movies!!
The judging makes good observations. You guys, I haven't mentioned the judging much, but I think the judges on this show are actually really good. There isn't much egregious terrifying lapses in judgement, and they say things that I think we're all thinking. The only time things go haywire is supposedly after Sam breaks down on the runway. He doesn't bring up his suicide attempts on the runway literally, saving that for the asides. Or, at least that's the way it's edited. Anyways, after the suicide attempt reveals, suddenly everybody starts revealing their private parts of their lives and say that Sam's outfit is interesting. For some reason. And, nobody wins. Nobody loses.