Under the Gunn S1 E11: The Benefit of Fashion 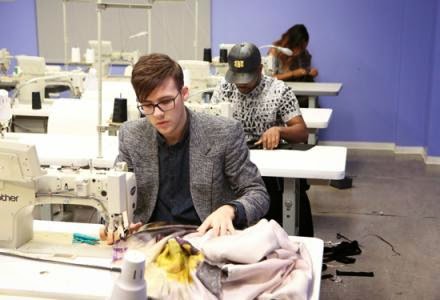 Last week, I noted that we finally were moving from a mentor-focused series to a designer-focused series. This is a big relief because it allows us to root for somebody with actual feeling behind the characters. Not to mention, I think we're all a little tired of the mentors. Mondo became a huge dick last week that nobody likes. Anya is rather a hypocrite. And, Nick...well, he keeps having the same revelation of trying to leave his designers to design on their own.

The designers that remain:


Seriously, though...who is Blake? Do you guys know? I keep trying to find him and turning up nothing. More nothing than even Natalia. Whatever. He's still here and I don't actively dislike him. I just...he's a big blank slate.

This week, surprisingly, doesn't open with a bunch of morning chitty-chat in the hotel. Probably because Asha would have been left out since she's sleeping by herself. Instead, we're treated to a burlesque outfit, where the men freak out because...women and sex?!  ZOMG. Get your boobies off me! Where's your penis?! Seriously...I don't even know what's up with their reaction, because most of the gay men I know love burlesque and breasts. I mean, it's B&B! What gay man doesn't like B&Bs?

The burlesque is because the Benefit makeup company was started by a dancer who wanted to make her aureoles redder for more tips. Which, I didn't realize was a thing outside of Showgirls. For those of you who haven't seen, during Nomi's revenge scene, her nipples are angrily red. Which, I thought was a bizarre quirk of Verhoeven that went with her revenge nails.

The challenge is a burlesque challenge, right? The female stripper clothing challenge? Right? This oughta be fun! I love when the designers have to design tacky tear-away clothing. But, alas. Project Runway, you tricked me again. You scamps. This is actually the real woman challenge. There are five women who have five real life challenges that they're facing. And, the women have been pre-assigned to their designers. Which...what? Under the Gunn, you're going soft on us.

The women:
If tradition holds, Sam and Blake are on top because they have women who are closer to model figures. Also, Dani would be on top, but she wants a gown which means that Oscar is going to compromise his usual taste levels and totally go pageanty for her. And, probably over the top pageant which could mean bottom of the barrel. But...we'll see how this show goes because its already thrown me for a few loops this week.

The client pairings get along well, but these designers are generally so timid and without their own vision that most of them get lost immediately. Sam has the idea to create a tight outfit. Shan has to figure out how to make something sophisticated and sexy that shows off a body that also has extra skin from motherhood. Blake...well...what does Blake do?  Does anybody remember? The only designers to keep a version of their vision through even the initial client conversations are Asha and Oscar. Asha because she is told to create something sexy with a lot of bling, Oscar because he seems perfect to create a pageant gown.

This extends to the fabric selection. Sam gets a variety of mis mashy fabrics. Shan gets a sequined fabric that I think my grandmother had in the 90s (she loved bling and things that shined. Asha goes gold. Oscar goes green. And, Blake...well...he gets the most hideous looking print I think I've ever seen on Project Runway. Who made that fabric in the first place? did he get it from the discount rack? Who the fuck is Blake?!

During the mentor consultations, the only people to get any praise are Oscar and Shan. Apparently old lady sequins are hip or something? I swear. Asha is going over the fucking top. Blake is lost...well...its not like we know who Blake is. Then Sam created an awesome bloody nursing outfit...which is more Halloween than fashion.

But, this episode throws another curveball to the audience because Shan's model is allergic to the fabric of Shan's top. She almost faints during the fitting then calls to say that she broke out in hives...which...lovely. Which means that the old lady top is gone, which is possibly the best thing that could have happened for Shan because that top was soooo boring. He ends up making three outfits by the end of the episode.

The other designers are visibly exhausted. And, it's practically like watching a Bataan Death March. Mondo is getting in a fight with Asha's client. Sam and Blake are both lost and tired. I think they switched the usual coffee with decaf or replaced the cocaine with flour, or something. Everybody's just drag-ass. Oscar's the only one who's still summery and bright, practically whistling a happy tune as he's finishing up his pageant dress. It helps that he's fast as hell.

Eventually we stumble across to the runway. I don't quite know how. This week's special guest judge is Annie Ford Danielson, Global Beauty...she works for Benefit.


Team Nick
Team Anya
So, judging goes as expected, though everybody was a bit gentler on the outfits than they deserved because you don't want to make your fan clients cry. Do you? No, of course you don't. Shan wins because...there's no other option for a winner. Blake goes home because...who the hell is he again?

Stray Observations
Posted by Julius Kassendorf at 2:38 AM