Under the Gunn S1 E8: "It's an Unconventional Beach Party!" 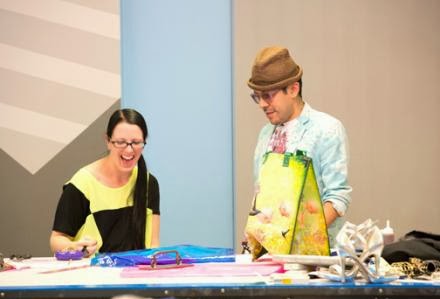 Today's episode opens with everybody lamenting the loss of Nicholas, and Anya's undermining of Nicholas' confidence. You know, without acknowledging that Nicholas was an accomplished menswear designer, but an amateur (at best) woman's designer. It's all really unfair to Nicholas, especially when Anya is all "I spent 15 hours sitting next to him" without adding "crossing my arms, breathing through my nose, and ordering him around through clenched teeth."

For the previous 4 episodes, the editors of Under the Gunn have been choosing to focus on either Anya or Nick as the subjects of the episodes. Mainly because the winners and losers have come from either camp, especially in the past couple weeks. Unfortunately, that means that we've also been getting a dearth of Mondo.

During the design process, everybody starts out on wildly different techniques. Natalia starts knitting. Sam is using a bamboo mat to make a jacket. Michelle is using rubber material from beach balls. Stephanie is using flower leis but hasn't figure out what to do with them. There is a wildly different array of techniques, which is a surprising variety even compared to previous unconventional material challenges.

This week, as mentioned earlier, focuses on Mondo and how he leads and encourages, but also critiques. His general attitude is to point out flaws in approaches, but also to push for better choices and to support his designers in their abilities. But, like all of the other mentors, he also focuses on those who need his help most. Later in the episode, Michelle laments that Mondo isn't paying as much attention to her as he is to the other designers, and doesn't know if that's because he trusts her or if he doesn't believe in her. To the viewer, she's also one of the designers who has mildly regressed throughout the season.

In part, as the story goes, Mondo sees potential in both Asha and Sam that was unfulfilled in their portfolios, and so dedicates more time to them to develop their eye. Michelle, on the other hand, had a developed eye in the first place, and so he mainly just bops around because she might not need as much help.

Contrast Mondo to Nick, who was at first completely hands on, and is now trying the Mondo technique of editing where needed (Oscar) but being otherwise encouraging and trusting of his designers (Stephanie). Oscar basically needs to be edited, because, as mentioned in the premiere, he suffers from the Spanish cliche of over-the-top throw-in-everything-and-the-kitchen-sink type of design. Oscar's first two designs totally filled that role until Nick came around and told him to change his direction.

The editors of Under the Gunn are also doing a great job by setting up parallels between Mondo's team and Nick's team. Sam and Oscar both have to make U-turns to great effect. Sam and Stephanie are both suffering from confidence issues. Asha and Natalia are both using unusual techniques with layers and woven type materials to create looks. Stephanie and Michelle are both using rubber materials, and also both getting the least amount of help from their mentors.

Meanwhile, Anya is widely ignored...because she's terrible. They keep giving her asides, and way more lines than they seemed to give Mondo in the previous episodes. I don't really know why. It's not like she's all that insightful. Maybe it's because she's photogenic?

Anyways, we eventually stumble our way to the runway. Georgina Chapman is back.

Team Nick:
Team Anya
Team Mondo
The judges this week can't decide on who wins, but their top 2 are both in Mondo's camp. Mondo has to decide between Sam and Asha, and picks Sam as the winner as a bit of a pick-me-up. I preferred Asha's look myself due to it being more innovative, but I can see Sam as well. And, because the look was unfinished and ugly, Stephanie goes home.

I kind of liked that the judges left the hard decisions up to the mentor if the mentor had to decide, kind of like a team captain. But, making the mentor choose the winner is more like choosing favorites, which is like of lame. The judges needs to make a decision sometimes!!!

- Anya, your critiquing designers that aren't under your mentorship shows just how terrible a mentor you are.

- Blake winning a bonus prize for incorporating a design detail suggested by his model is kind of cool. I hope that he shares part of that prize money with her.

- Can we talk about the non-runway fashion choices? Sam in a long-sleeve shirt with a giant sad hound dog printed on his chest. Oscar is in a rejected outfit from a Sylvester Stallone version of Scarface that makes me shout "It's Lacroix, darling". Mondo in a suit made of a cloudy blue sky. Mondo's confessional shirt that looks like he got a haircut while wearing it. There was a lot of ugly not on the runway today.

- Ugh to the title this week, Can you get any longer and more unwieldy?
Posted by Julius Kassendorf at 10:22 AM