Under the Gunn S1 E9: "Trouble in the Lounge" 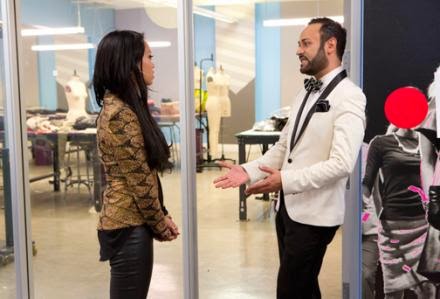 Yes, dear readers, this is a huge drama episode. And, it actually centers around a designer. We're also back to a Nick-heavy episode. But, surprisingly, it isn't a Nick vs Designer episode. So, it's a new formula!  We're all about new forms of storytelling within the given formula here, as long as it works.

But I get ahead of myself. Thanks episode title. The challenge this week is the periodic day to evening outfit. The outfit has to transform on the runway, in front of the judges. It's all because ladies are fickle as all hell women like choices. If you expect them to be able to choose between scents to decorate their house, how do you expect them to commit to a look for day and evening? I keed. Everybody knows that it is really convenient to go from the office straight to dinner to the theater when you get off work at 5, the theater starts at 7, and your home is an hour (round trip) out of the way.

The designers start sketching, and as they start sketching EVERYBODY starts bitching. Bitching about who? They're all bitching about Natalia. In case you don't remember, last week Natalia had that really interesting weaving thing, while both Michelle and Stephanie (the bottom two) had neon plastic things, where the former was trashy 80s acid raver, and the latter was so completely unfinished. I guess people liked Stephanie over Natalia, on a personal level. Suddenly, all the other designers (except Oscar), and both Mondo and Anya start to gang up against Natalia. They're bitching because they thing that Nick is giving Natalia far too much help and is way too handsy.

Mind you, Nick opens the episode by reinforcing everybody else's opinions. He starts by giving tips and ideas to both Oscar and Natalia, and also spending extra time with Natalia to help her through her emotional battles. The editors chose to make a victim narrative out of Natalia for this episode from the first frame. To me, it seemed to come out of nowhere, but maybe I'm missing something. Natalia seems like a frenetic girl but she doesn't seem mean to anybody. If we're making a hard working but emotional person who doesn't sabotage anybody else into either a victim or a villain, you know we're stretching for plot.

Of course, Natalia breaks down by the first break, in part because the editor has edited all of the people to be angry at her. If you know anything about microaggressions, they do add up. But, they add up especially if 85% of the people in your area are angry at you because they felt you should have gone home.

This is also a Nick's Growth episode that seems like a repeat storyline. Early in the episode he's telling Oscar to make a shirt dress with snaps and how to make it transform. But, by the end of the episode (at least in front of Tim), he's asking the designers to edit themselves. Didn't he already have this revelation? Hasn't he said "OMG, I should really trust my designers?" Namely, in the team episode. How many times can he have this revelation??

Anyways, we actually get some comparison with both Mondo and Anya. Both of them are attempting to disengage from the designers, and not tell their designers that their ideas are shit. They haven't quite figured out how to critique ideas constructively. Anya's critiques are "You might want to reconsider the pants." Or "This would look really boring in black." Mondo's critiques are "finish it off. Super clean." "Back up a little and just let it be more organic." Instead of challenging their designer's concepts, several of which are extremely hideous, they're content to just give tips on finishing. And, in Mondo's case, moral support.

They don't pull a Joanna Coles and say "this outfit is going to look like its a 70s throwback." Or, "That first silhouette looks like a sack and the second look looks like a straitjacket." Even on day 2, when Shan has a too wide cummerbund wraparound, Anya asks "what can we do about that?" without actually making a comment as to why it looks so bad.

There has to be a balance. I know that you're supposed to be playing team captain, but you need to be really really critical sometimes when the designers are going down a wrong road. This is part of being a good leader. Knowing when to encourage, and when you need to yank the wheel to the left.

Through many tears and indifferences, we actually make it to the runway, somehow. Today's special guest is Macklemore...who...ugh. Yeah, yeah, I know...he made a song about gay marriage that was radio friendly and blah blah blah, but I have strong negative fee fees about him that don't belong here. And, why can't we ever get Ryan Lewis? He seems to be the less douchey of the two.


Team Nick
Team Mondo
In the end, Michelle goes home because we needed to even out the teams (cynical much?). Oscar wins because...I don't know. Today's runway was kind of full of ugly today. We've had much much better day to evening transformation challenges, and this was kind of an all around fail.

The episode doesn't end there! After the judging, everybody is bitter that Natalia not only didn't lose, but was in the top. They think that Nick was helping too much, and it has been too late in the game. While I tend to agree with this reasoning, the problem is that the judges (except for Tim) don't actually see this work manipulation process. In the end, it just comes off like really bitter sour grapes.

Stray observations:
Posted by Julius Kassendorf at 3:23 AM