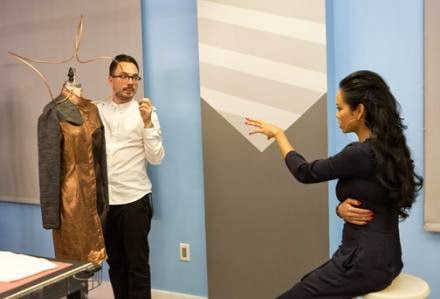 Earlier this season, I said that Under the Gunn is more about the mechanics of mentoring than the design process. At the time, I was citing that most of the character arcs we've been watching has been the arcs of the three mentors: Nick, Anya, and Mondo. So far, it seems that this assessment hasn't been wrong.

Really, what do we know about most of the designers? Nicholas is a menswear designer who can't design for a woman. Shan is rather gay for a married man. Sam kind of only claimed to be sassy to try to catch more airtime, but hasn't lived up to his Sassy Sam nickname. Oscar is Spanish, a fast designer, and a leader. Um...Asha is a good designer who is also black? I don't really have much to say about ANY of the females. It's not for lack of watching. The only female who gained some screen time not related to her mentor or her designs in the past SIX episodes was eliminated two episodes ago. And, really, the men's stories were mostly givin in those first two premiere episodes.

Any enjoyment of Under the Gunn really depends on your tolerance of Mondo, Nick, and Anya and their personalities between the episodes. If you can take Nick and his gay daddyness, Anya and her rapidly changing mentor styles, and Mondo with his kindergarten teacher encouragement, then you will love Under the Gunn. If you like watching designers design, you will also find enjoyment. But, if you want to learn about what makes designers tick, then you will find the show wanting.

The reason I bring up that we know nothing about the designers is that this episode is one of those episodes that forces designers to shoehorn their vision into an aesthetic they may not be familiar with, or have downright animosity toward. This week, we have to deal with an Avant-Garde challenge, and a Steampunk challenge. Now, Project Runway already has a sketchy relationship with Avant-Garde, considering how traditional it likes it's avant-garde outfits (especially in the Lifetime years). But, slamming a Steampunk aesthetic on top of it also lends itself to be an exhibit that is more about outfits you'd find at sci-fi cons, goth clubs and Burning Man.

Steampunk is a specific aesthetic, and one that was all around the edges of Season 11 what with Portlandia being the winner who specialized in a darker goth/steampunk styled aesthetic. Some designers at the beginning already express problems with the episode. Shan is like, "huh, what the fuck is this? Don't you know that I don't care about this shit?" Natalia has dabbled in steampunk for four years. Blake is lost...because his aesthetic isn't futuretech.

The only designer that we actually get any insight into as a person, and not as a student designer, is Natalia whose lifetime insight is "I really like Steampunk." Not, "I experienced Steampunk when I was living in..." or "I went to --- where I first saw steampunk." Though, at the end of the episode, she does say "I am the child of two engineers." I love this girl.

In the absence of these larger world revelations, we're rewarded with more insights into the design process. Team Anya are all discouraged. For the first half of the episode, Shan is like, "I'm modern, bitches. In the 1800s, black people were slaves. Why would we idealize this shit?" This is also reflected in Asha's weird use of picnic blanket flannel for the majority of her outfit. Nicholas can't get his shit together to sew to a woman's body. Boobs? Hips? Hourglass Figures? Silhouettes that aren't big masculine blocks? These things are all foreign to Nicholas. Blake is like, "I'm too gay for steampunk. Why won't Anya tell me what to do?"

Team Nick has the most inspiration, outside of Nick. Oscar's ego is currently floating on air, where he's going overboard. Natalia is delving into her steampunk past to create an actually mechanical dress (which...I'm in love with her). Stephanie...is absent for the most part.

And, Team Mondo is mainly coasting. Asha does a picnic blanket thing. Um...Sam exists to make bitchy comments. Michelle doesn't exist at all this week. Nobody cares about Michelle. Or, Mondo for that matter.

As the above paragraphs show, this is an Anya heavy episode. Please read that in the same tone as Lrr talking about Friends. Anya and Tim get heavy, heavy time with Anya's designers. Anya has to kick Shan's ass being like, "Bitch, I know that Steampunk may not be your aesthetic, but you have to send something that is Shan down the runway." Blake is lost, and remains lost, being the lost designer that he is.

But, the one who gets the most airtime is Nicholas. Last week, I made the error saying that Nicholas went home. I wasn't far off. After being repeatedly in the bottom, and not getting any help at all from Anya about how to design for women, he's now in a funk. I think, at this point, he knows he picked the wrong mentor. Did he not see Anya's season? She knows how to drape. He knows how to tailor. She cannot help him with learning how to tailor for women's bodies. At all. Ever. Period. She can send down a stylish easy sarong, but Nicholas is all about fitted fabrics.

If we remember, Nicholas made the hilarious mistake in the premiere episodes saying "what better than a woman to help me learn how to design for a woman's body?" HAHAHAHAHAHA!!! That was a good one.

Anya also doesn't help anything because, this episode, she suddenly turns into that bitchy woman from those awful pageant/dance shows that we keep getting advertising for. As a former pageant queen, its only natural for her to base her mentoring style from her mentors, practically turning into a cutting bitchy monster. Look at her body language on day 3 when she's talking to Nicholas. She's standing around him with her arms crossed, pointing, or hands on hip, breathing through her nose with teeth clenched and about ready to stab Nicholas. Then, she spends half of her episode bitching about how her self-centered, negative reinforcement, military-style approach to mentoring hasn't motivated her designers! "Why doesn't saying that they're an awful designer, and even suggesting that they didn't design the stuff in their portfolio, motivate anybody?! It's beyond my capacity for empathy!"

Now, I should say that not everybody should be Den Mother Mondo, who is all about gold stars and blind support. But, his designers are happier than Anya's, and actually putting out work that strongly emphasizes their point of view even if the designs ended up in the middle of the road this week and last. Nor, should anybody have been Helicopter Parent Nick, who I think is now starting to experience Empty Nest Syndrome, since at the end of every episode lately, he has the same revelation of "I should trust my designers more." Ugh. YES YOU SHOULD. TAKE YOUR OWN ADVICE!!!

Eventually, we somehow get to the runway. Nicholas is in the nick of time, because his design of a female's trench coat seems to be beyond his capacity, especially with Anya sitting on his ass the whole time. This week's guest judge is Georgina Chapman (whom you may remember from such achievements as Project Runway All Stars).


Team Anya
Team Nick
The judging is strange. Team Mondo, collectively, is in the middle. Despite Michelle's fantastic outfit that exuded both avant garde and steampunk elements without being costume. Shan, Oscar and Natalia are in the top. I don't understand the love for Oscar's outfit because it is so costumey. But, whatever. Michelle got robbed for the spotlight. Shan somehow wins over Natalia. I don't understand it. Even without the mechanism gimmick, Natalia's was the best. *throws remote*

Nicholas, Blake and Stephanie were in the bottom. Anya gets to decide between Nicholas and Blake, and Nicholas FINALLY goes home, because he can't design for women. At all. She tells him that he needs to take this advice to heart, and he says, essentially, "If I actually had time, you know, I could pull off some great shit. DIAF"

Random Observations:
Posted by Julius Kassendorf at 4:06 AM