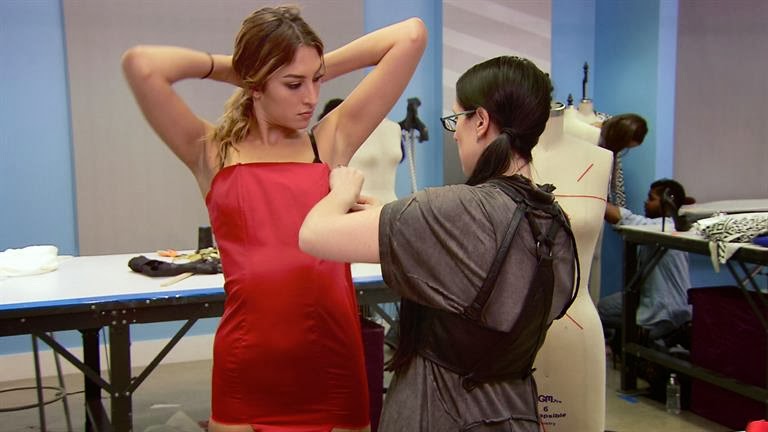 Welcome to the regular season!

After our 2-episode 3-hour-total premiere, we're now down to one-hour competitions, only in a new format. But, the big question before even watching the episode is "what the hell is the new format going to be? And, is it going to be as crazy as the first 2 episodes?"

I'm excited to say that the new format is just a tweaked version of our traditional Project Runway. There is a competition that comes with a silly time crunch. There are 12 designers who have to do a design is inspired by this week's sponsor, and they get to be mentored during the show. There are still cutaway confessionals. The tweak comes with having 3 mentors instead of just one. Since each mentor is dedicated to only 4 designers, the mentors have the option to spend more time with their designers. This also allows Project Runway to add in cutaways of Tim or the mentors bitching about the other mentors. It folds in somewhat seamlessly.

This week, Project Runway is having the designers make a red carpet look inspired by Hollywood, with the sponsor being one of the double decker bus tours that you see tooling around LA all the time. Some designers are all "OMG, Red Carpet?!" Camila is inspired by art deco. Michelle is inspired by jewels. But, the interesting part is that the mentors are around for the sketching period. In all other iterations of Project Runway, the sketching was done solely by the designers. The one exception used to be if the designers had a commercial project where they had to fit within some manufacturer's price point.

In Under the Gunn, suddenly the designers are given advice by the mentors beginning with the sketch period. So, if the designers can be all panicky, the mentors can try to shake them out of their dead spaces. Later in the show, this may be something like the designer falls into a black hole and the mentor shakes them out of it. Both Anya and Mondo give generic advice like "it isn't necessarily a ball gown." But, Nick V, being a professional educator, gets hands on in an effort to show what he thinks works best. Including sketching, on the bus.

This overprotective behavior extends throughout the episode. He starts out by telling them what he wants to see in his dresses, techniques that work, flourishes that have been used in the past, and an overall sense of following the rules. Later, Nick moves on to resketching for his designers, laying out educational pattern making, tracing and cutting material, draping material, and all but doing the foundations for his designer's dresses. To be fair, for the most part, Nick did get some of the weaker designers, with Isabelle and Natalia being the ones of the premiere episode that I wanted to see more of, but they had construction issues.

Mondo and Anya, however, don't have that educator background. They take more of the Tim Gunn approach, telling their designers something is not working, sloppy, trashy, or otherwise needs to be edited or rethought. Mondo has more of an eye towards sewing perfection, while Anya has more of an eye towards taste level. Their designers, in turn, flourish under the hands-offy advice which allows the designers to speak through their clothing.

The interesting dynamic that happens through the different structure of Under the Gunn is that the designers are actually relatively nice to each other, and they spend their time helping within their smaller group. Even though Under the Gunn is ultimately judged in the same manner as Project Runway (non-teams editions), with every designer being judged on their own, the tying into groups by way of mentor creates tighter bonds between the designers. They aren't enemies to the other groups, but they do help each other in the groups.

Soon enough, it is time for the runway. Under the Gunn has a constant award to the winners of the runway, where each week the winner receives a flat $5000, plus whatever extra rewards may be involved in the sponsorship. The extra reward this week is a promise that the winning design will be in Marie Claire and worn by a as-yet-to-be-named celebrity.

This week's judges are: Zanna Roberts Rossi, Jen Rade (a celebrity stylist), and semi-staple Rachel Roy. I don't know if all three judges are temporary, or if any are permanent. I suspect that there are no permanent judges since we're in L.A.


Team Mondo:
Team Nick
In the end, the lowest dresses are Stephanie, Michelle and Camila. The highest dresses are Shen, Sassy Sam, and Blake. Weirdly, Sassy Sam's jumpsuit wins, even though it seems the least red carpet of the three top dresses. Also, strangely, Camila is the one who goes home, despite being up against 2 tortured dresses.

Random Observations
Posted by Julius Kassendorf at 12:15 AM