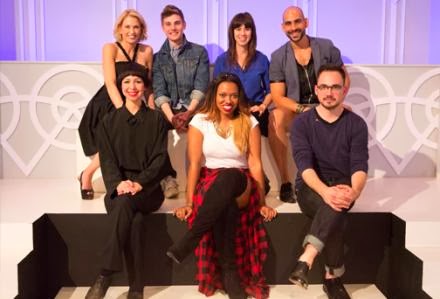 Welcome back to Project Runway's The Voice-inspired spinoff, Under The Gunn. Today, we bring you Part 2 of the 2-part season premiere, with each episode lasting 90 minutes each.

In case you missed the set up for the premiere, here's the set-up for the 2 premiere episodes:

Which is a lot to pack in in 90 minutes. Add in that we have to do this twice in two weeks, and *whew*. Under the Gunn editors, my hat is totally off to you for these two episodes. The episodes were as close to coherent and interesting as that huge event listing could lead you to. Faithful readers, according to my DVR, we return to 60 minute episodes next week, so I'm not sure what the new format will look like on a day to day schedule.

Where we left off last week, 1 of the 15 designers has gone home, 2 of the remaining 7 have to go home this week. Anya has 3 of her four slots filled, while Nick and Mondo each only have 2.

The design challenge this week: there are big barrels which have bolts of fabric hanging around in the background. The designers have 30 seconds to grab as much fabric as they can and figure out what outfit they are going to make in the 6 hours.  Which is different than last week's everybody gets a bag of the same shitty 4 fabrics.

The designers this week:


As I mentioned earlier, this week has a completely different feel than last week. Last week, all designers had 4 really ugly fabrics, including a polka dot and a gold lame. But, this week, all of the designers have a completely different set of fabrics, which they chose on the fly in 30 seconds. So, while they don't have the 30 minutes that we're used to at Mood, at least these fabrics have a semblance of taste and generally kind of fit with what the designers are comfortable with.

While the designers are designing, they are also setting up their archetypes, which I had started to hint at in the examinations of the contestants. Amy is the bubbly elder woman. Rey is flat and mildly negative, with a kind of intensity that almost borders on hot scary, and also has a lack of filter in his word selection. Stephanie is the pixie arty designer. Sam is a bitchy baby gay. Nicholas is a quiet hard worker who may come out of his geeky shell, and may have an emotional arc. Isabelle is the hyperactive time-mismanager. Asha hasn't had much time to shine yet.

All of the above came out in the first 26 minutes of the show. Which, if you've not been watching, gives you an idea of just how hyperactive and overpacked these first two episodes of Under The Gunn actually are. The mentors have already had their consultation as well.

Tim consults the mentors to see how the choices are going. Anya continues her observations, saying "their looks are more varied; pushing the boundaries more." And, really, that's what happens when you give them better fabrics, and different fabrics from each other. The fabrics talk to you and say what they kind of want to be, and so the looks are going to push the boundaries when somebody is going with a flimsy see-through pattern, while another is using a heavy pleather or vinyl.

The first challenge focuses on ingenuity, while the second focuses on style. The first places everybody with respect to each other, while the second places everybody on their own. And, therein lies the problem I have with the differences between these two episodes. Since, ostensibly, the mentors are making choices based on the same criteria in both episodes. I prefer the second episode, since the first episode has traditionally been a "speak with your voice" episode, and the second is much more of than than the first. What are your guys' takes on this? I think that this discrepency actually has a lot of meat, but I could be stretching.

Anyways, soon enough, it is time for the models to come in, get dressed and made up. And, HOLY HELL, Rey is only wearing a pair of boxer briefs? Well, that's about all there is to his pants on Day 2. Jeez. He's a career-oriented slut.  I like him. And, this is when we have Isabelle getting cut off from her work, since she was sewing past the last minute.

Runway:
In the end, we have our three teams:

Rey and Amy go home. Which, sad. But, Rey was over designed to the point of wut?, and Amy has a shining future designing for the expensive boutique-going crowd. She just has to open a store, and get to it.

And, this concludes the 2-part, 3-hour total, premiere episode of Under the Gunn. How are you guys doing?

Random Observations:
Posted by Julius Kassendorf at 2:50 AM