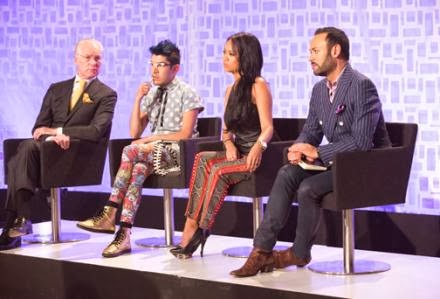 Welcome to the first half of the premiere of the new show Under the Gunn, better known as Tim Gunn Wants To Retire, Bitches. This is a two episode premiere episode, and each episode is 90 minutes long, so we're in for a 3 hour premiere.  WHOO!!!

Under the Gunn is an experimental show, kind of. It borrows its format from The Voice in which there are three Project Runway-experienced designers as mentors who get to choose four designers from a pool of 15 potential contestants to figure out who is going to win.

The show seems to be two fold. The first is the usual Project Runway styled challenges, and the second is to find out who will work best as a mentor and fit the format of Project Runway, which Heidi Klum will probably maintain as hostess.  Or, they're going to be the next mentor on Project Runway All-Stars. Of course that's pure speculation on my part, as the mentor position is not part of the prize package.

Because we're borrowing from The Voice, we get 2 premiere episodes. One this week, and one next week. They both are 90 minutes long, the new length of Project Runway classic edition. I don't know if the later episodes are going to remain 90 minutes, or if we're going to revert to the usual spin-off length of 60 minutes once all this initial choosing stuff is going to be finished. I suspect the whole season is going to be 90 minutes, as I suspect Lifetime had been all "Hey, Where's Project Runway Winter 2014?!" The producers then were like "Tim, help. Heidi is busy because we forgot about that."

The first surprise is that we're no longer in New York. We're in Los Angeles at FIDM, aka Fashion Institute of Design and Merchandising, where Nick Verreos has been a mentor for 10 years. And, if anybody remembers the dreaded Los Angeles season (aka the first Lifetime season), we're already seeing doom and gloom.

The challenge is for the fifteen designers to be divided into two groups. The first 8 designers are given a bag of 6 shitty fabrics, and have to knock out a dress in 6 hours. Seriously. 6 hours. I guess people need to sleep in in Los Angeles. And the fabrics are a polka dot, a gold lame, lumberjack flannel, black, blue and a whore's pattern. Oh, wait, that's probably Horse pattern. Sorry. That was one of those designers.

Meanwhile, the mentors have to look over the portfolios and through that we get our introduction to the designers. This integrates the portfolio aspects of the usual Project Runway pre-show within the context of the show. Which is interesting in a way because most people don't watch Project Runway episode 0, but it creates a completely schizophrenic episode.

In the first group of designers, we have:
- Blake Smith, 25, Hoboken - Young, cute, and boring. SNOOOOZE.
- Shan Keith Oliver, 33, St Louis - This season's black male designer. Married with kids (wait, what? Not gay?). But, he has a lot of style and edginess in his portfolio.
- Natalia Fedner, 30, West Hollywood - WeHo = fashionable, slightly trampy, fruit fly, and her design aesthetic shows that.
- Brady Lance, 29, Portland - Designs Streetwear, men and women. For some reason I confuse him and Blake because they're both generic gay stereotype #4 stolen from The A-List
- Michelle Uberreste, 29, Burbank - Edgy, future sci-fi inspired designer. A less gender bending Elena.
- Oscar Garcia-Lopez, 40, Coral Gables - Designer from Cuba. Which means, he's going to be steeped in tacky and conservative
- Melissa...I couldn't find any information on her in the show. Spoiler: When you're one of 8 featured designers and you only get a brief consultation, your outlook isn't good.
- Camila Castillo, 47, Caracas Venezuela - Older and future edgy.

In the course of the first episode, the 8 designers are also preyed upon by the 3 mentors when they come in to assess everybody's progress. This won't be the format after episode 2 hopefully, but it is fun when they descend on the designers and the designers have a look of fear.

This first evaluation exposes the best and worst of our mentors. Anya, talking about Camila's style, "Because, we've seen this technique in your portfolio, I would just pay attention to what you haven't shown us." And, "Camila seems to be taking the safe route." Anya says this without a HINT of self-awareness or irony. Especially after seeing Anya's collection of beach wear that looks like every collection of Anya's beach wear ever.

Nick Verreos emphasizes the weirdest words, making it easier to transcribe. "Polkadottedfromheadtotoe. [pause] I...hope...it doesn't end up looking like Mi ckey ... or ... Mi nny." I think he ran out of gasoline by the end of those two sentences.

Mondo is the only one who has a personality that doesn't bug me, but he is still so inexperienced that it shows in his advice.

On the flip side, we have designers trying to create personalities to stay on the show longest. Blake is fussy. Camila is contentious. Oscar is Cuban. Natalia is a ball of nervous energy and a source of drama.

Everybody is design design design, and then we get to the makeup and hair. Handlebar Moustache Guy got to be in Los Angeles and now has a crew cut. Which, ZOMG. Why weren't you at the Eagle when I was? Drool. But, we have a new hair stylist, who is also hot, but not Handlebar Moustache Guy hot. Especially when HMG almost cuts a bitch because she tells him how she wants her model's hair done. This moment is emphasized by Under the Gunn's new modern Big Block All-Caps Font used outside of the Project Runway-designated subtitle area. "I love you, but we're in the makeup room right now!" Followed by a forced smile saying "can't you see the makeup or read the brand name on the wall in gigantic letters?!" This is my new favorite Project Runway moment.

And, we get to the runway, which is a modern set with a lot of crooked lines, and poppy colors. It looks less like a runway and more like a tv set made to look like a runway. Its intimate and fresh, but it doesn't have the practice class feeling of Project Runway's runway. Plus, the lights on the runway seem to be so that the outfits were backlit when the cameras were filming them. Maybe this will be fixed in the next episode.

Runway:
Michelle - Black and Gold Lame is so tacky. And, this is no exception. It would have looked better in blue. But, it is modern and not a complete disaster, with a really nice silhouette and decent looking, though rather hoary, sleeves.

Brady - A trainwreck using every textile. It's just so so much. It's cute, but all together its just...whoa.

Natalia - Given that she had six hours, this dress was headed in some amazing places, but the execution was terrible. I love all of the design elements in the dress, from the braiding technique, to the black and blue collar with a strip to the back. The silhouette is nice too. But, with the time constraints, the lines are crooked, the hem is unfinished and sloppy, the dress is way too short, and its just a gread idea executed poorly.

Shan - Ugly ass bomber jacket with two patterns that don't mix, and a great black cocktail dress that has short sleeves, which I kind of really like in their tiny detail.

Oscar - SO SO MUCH. Tacky, overstyled, and just so over the top.

Camila - The only black and gold dress I like. It uses a great technique, even though Anya is bored by it because she hates Camila. Anya feels like she's trying to become the Nina of the show.  Which is so terrible. Anya isn't talented or observant enough to be the next Nina.

Based on this, the mentors now get to fight over the designers to form their team.

In this episode, Tim Gunn, as host, plays a huge role in the show. He's like a mentor of the mentors, and doesn't just appear at the beginning and the end like Heidi does. He's integrated into the show, and almost a little too hands-on. I like seeing him mentor, but let the mentors mentor.

- Blake and Brady are interchangable. And they're on the same team.

- The next episode is going to be just as schizophrenic, but we'll find out how this plays out in S3
Posted by Julius Kassendorf at 5:43 PM

Email ThisBlogThis!Share to TwitterShare to FacebookShare to Pinterest
Labels: Episode 1, Melissa Loses, Project Runaways, Recap, S1E01, Season 1, Under the Gunn, Who is Under The Gunn