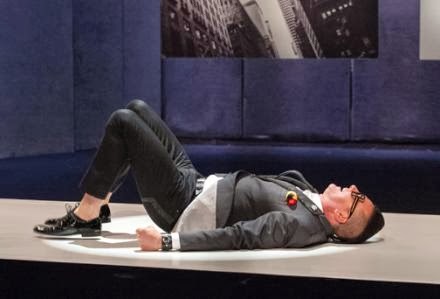 Hello constant readers. Much thanks to Mediagrrl for her brilliant reviews that were hilarious and incisive as they were honest.

Congratulations! We've survived another season of Project Runway All-Stars. Barely. There have been some tears, namely Elena's. There has been some sweat, like Pansear running around with his mannequin last episode (and it didn't even come to life!). We've shared drinks at the tacky Jay-Z bar that shall not be named for its free advertising. And, so, all that's left is some blood.

Sadly, the finale of Project Runway All-Stars is not going to be a Thunderdome, where three designers enter, but one designer gets out...with special guest judge Tina Turner (Producers, if you're reading, that would have been a great episode, especially with Elena). This week's episode deals with blood in a different manner. Relations.

As Miss Milano walks out to tell u...holy hell what are you wearing?  Remember how she said she loved shoulder pads due to her name dropping Who's The Boss With Judith Light?  Well, now she's wearing a blouse with extra fabric posing as shoulder pads and a mormon collar? With the schoolmarm bun placed on the top of her head? Honey, you over Judith Lighted Judith Light.

Miss Milano tells us that we're actually exploring blood in terms of culture. Since we have a Liberian, an American, and a Ukranian as our three finalists, we're off to the United Nations.  Which makes me wonder what Pansear was. Would he have been met by Japan for his Poke-ness?

Seth Aaron helpfully informs the viewers that United Nations "is for officials from all over the world/ Humanity! Down...the list. That's what this building represents." See also: Hotel.  Thanks Seth.

The United Nations has decided to donate some time to Project Runway All-Stars by allowing one of their meeting rooms to be used for the finale runway. Because, why not? The designers are meant to keep their eye open and use the culture they have and are assigned as their guiding eye towards designing a six-look mini-collection. Seth Aaron has some Spanish in his background, so he gets Spain.

The three designers meet up with their delegates, which Korto likens to "meeting your mom's sister by accident on the street." Which would be your Aunt. Even if she was a "sister by accident," she's still your aunt. Korto meets up with George S.W. Patten, Sr, who holds several decent political positions. Her section was about the Liberian Civil Wars, and it feels like the whole season has been leading to this moment. Like, Korto had it in her contract to make it to the final episode and to spread the word of post-Civil War Liberia.

Seth Aaron meets up with the totally Unf-y Fernando Fernandez-Arias, who is also the director of Office of Human Rights at the Spanish Ministry of Foreign Affairs and Cooperation. And, Fernando is distractingly handsome, which is a good thing because the only thing we learn about Spain is that the land is sometimes Bright Yellow. So deep. I'm going to stare at your Spanish beard some more.  *sigh*

Elena talks about her personal journey from Ukraine to the US with Yegor Pyvovarov, who looks like a junior delegate as he may be 20 years old. Yegor talks about Ukraine Fashion Week, and is trying to get Elena to come to Fashion Week so that she can bring prestige to Ukraine or something.

Spain isn't even backed up with images of Spain yet. Not even stock images. Liberia at least has pictures of Korto in Liberia. Ukraine has images of Elena growing up. Yeah.

*sigh* Really, Project Runway?  That's as deep as we'll get? *breathe in, breathe out* I know I'm not asking for much, but we're at the fucking U.N. Give us some credit.

The three initial designs:
Elena: Fall/Winter collection (Ukraine is cold) in wool and bright colors of the Ukranian flag with her patented cut out technique dominating the collection
Seth Aaron: Architectural inspiration with Black and white with hints of red...and gold! Very modern very clean.
Korto: Pattern inspired by Liberian prints, with design that is based on the every day people going to the laundry.

Zanna Roberts Rossi comes in, and gives helpful hints like "you're behind" and "make sure your style doesn't change over the next few outfits."  Thanks Zanna. But, she also brings in helpers for the designers: Necktat for Seth Aaron (of course), Pansear with Korto, and Zinger with Elena (of course). You know what I noticed while watching the marathon yesterday? Zanna doesn't even come in to see anybody off. She's no Tim Gunn.

Then we get a twist on Day 3 from Miss Milano in a Blue pleather dress that would probably go really well with her bedroom hoods. They now have to make a dress from scarf material from some guy's discarded scarves (Product Placement!). This causes Elena to have another breakdown. Yeah, yawn.

Anyways, this is the last time we'll be seeing Handlebar Moustache Guy.  Which, ZOMG. Still fucking hot. Excuse me while I drool some more. I still remember his old Black Party picture I found. Unf. HMG, if you read this, call me!

Elena's Runway: It's like Elena's First Collection. It feels like somebody still developing her voice through the same patterns, silhouettes and materials. She never really developed her style beyond the one thing she wanted to say starting in her first season. It's interesting, but I was kind of hoping for something more.

Seth Aaron: A mini-collection of wow moments. To me, this is like a collection that Pedro Almodovar would be proud of. Sometimes a little kinky. Sometimes a bit retro. Sometimes a bit dark. Sometimes a huge pattern. Kind of stylish. I hate to admit it, but I kind of really like it. I think I'd not see as much Spain in it if I wasn't a Pedro Alomodovar fan.

Korto: Fascinatingly all over the map. Some just didn't work for me, especially the bright yellow patterns which seemed to be chopped up as opposed to a flowing thought process. Maybe she was making a statement on the destruction of Civil War. But, it didn't come across in the other pieces, and there was no flow through the show. She needed more of a throughline. Not Elena-style heavy through-line, but more than just here are some Liberian-inspired outfits.

I said in Episode 1 that this was Korto's competition to lose, and thought this would be engineered for her to win. She was going to be a Fan Favorite Revenge Story. I think they really were going to do that, especially with the Liberian Civil War focus in the beginning. But, her collection was so non-cohesive that they had to give it to Seth Aaron who had made a really good collection.

So, Seth Aaron deservedly won. I didn't think I'd be writing that sentence.

See you for the reunion.

- Miss Milano's final look is as a Ladybug.

- Isaac is off his meds as he had emotional moments with two different collections.

- Will you all be watching Under the Gunn?
Posted by Julius Kassendorf at 2:41 PM

Email ThisBlogThis!Share to TwitterShare to FacebookShare to Pinterest
Labels: Are U.N. or Are You Out?, FInale, Project Runaways, Project Runway All Stars, s3e10, Seth Aaron Wins