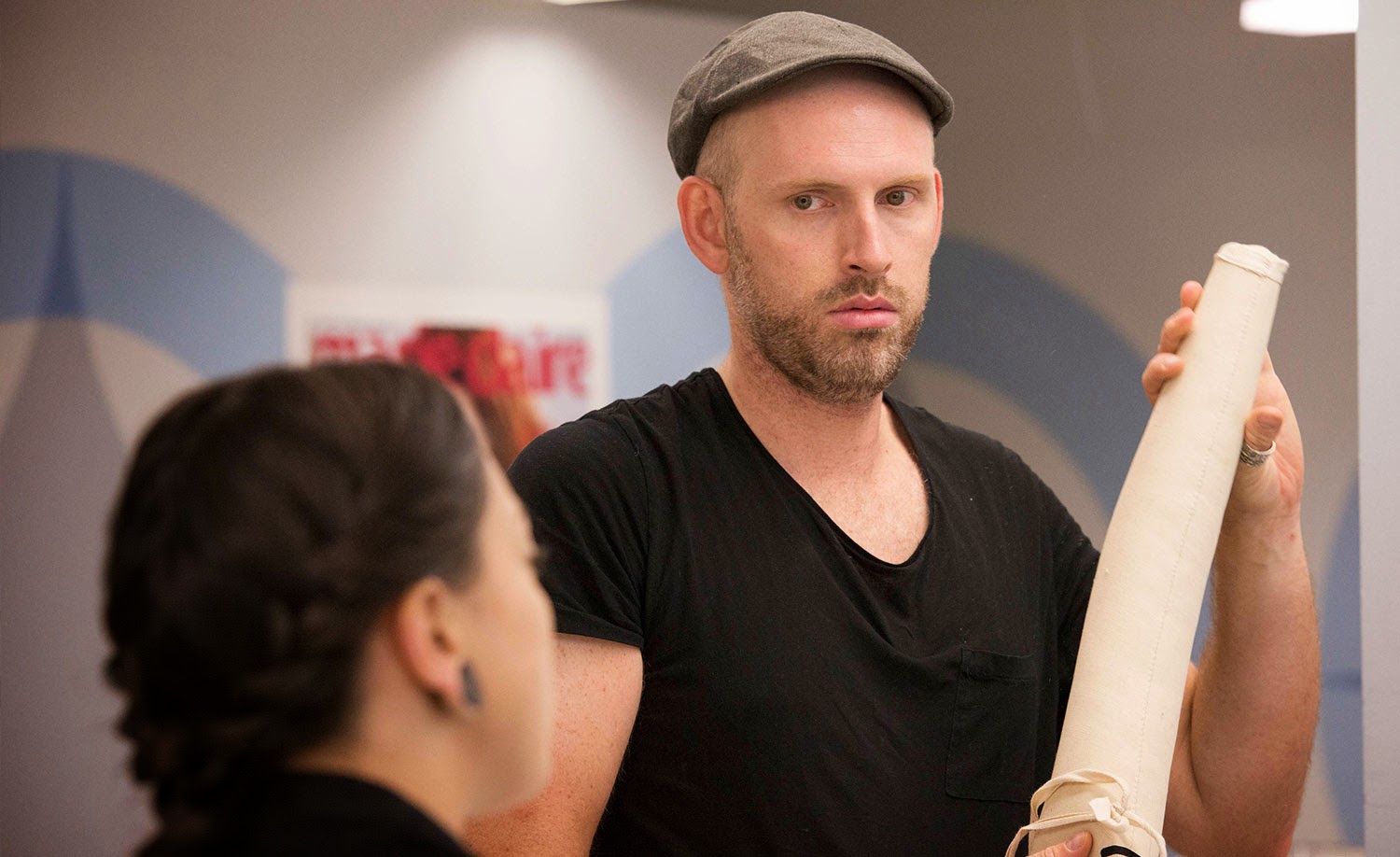 Stage show challenges are a favorite of Project Runway. It is understandable, considering the show is filmed in NYC in close proximity to Broadway. We've seen tie ins ranging from figure skating to the Rockettes to The Thunder Down Under. In fact, the Godspell challenge had a costume designed for the stage worn in the show. It is in this vei...

Wait...what? It seems that outside producers have figured out that one-day challenges suck. And, they don't want to commit to having to put a shitty outfit on stage sight unseen. They have good cause too, considering some of the lackluster designs that have come out. As a result, Project Runway All-Stars combined the stage show challenge with the avant-garde challenge, with the promise that the outfit would be in a window somewhere in the lobby.

The inspiration for this week is Wicked, the still-running musical about the Wicked Witch of the West. Wicked has been running for 11 years now, and is a Broadway juggernaut. I imagine that the ticket sales might be waning by now (especially with 2 different US tours also going around). There is no stopping Wicked, much like there's no stopping Project Runway.

The challenge this week pairs up the designers and pits them against each other. One side designs for Good, and the other designs for Wicked. The challenge runs two days, during which the All Stars must design a couture avant garde gown. The odd-on favorite of this is Chris March, who had designed one of Project Runway's all-time show stoppers with Christian Siriano (aka judge of Project Runway Threads).

Obviously, the intent of this is to create drama and in-group animosity. Friends will become enemies, designers will fight with each other, ideas will be stolen, stress will be created. But, because Project Runway All Stars is running like the classic Project Runway, everybody is mainly bitter at having to compete one-on-one instead of at each other. The designers, and the editors, seem to be pointed against the producers for trying to generate drama instead of actually making good television.

On the other hand, we're actually getting a 2-day challenge for once. I imagine this is in no small part due to the late start they're probably getting. Unless Alyssa Milano woke up at like 3 am to get her makeup and hair done, fitted for her dress, and then harnessed on top of a moon, I imagine day one was a late start as day one was finished before the first commercial break. Which seems insane.

The two days allows for some of the most interesting failures. Helen, for instance, creates a big gorgeous ruffle fabric, which is immediately reminiscent of the afore-mentioned March and Siriano success. But, she doesn't know what to do with it, and just attaches it like a giant carpet or something. She had a great seedling of an idea, and was able to execute it...but didn't know what to do with that seedling.

Fabio doesn't DO gowns, so elects to deconstruct the gown. Well, not so much as deconstruct, but construct the idea of a gown. Well, not so much as the idea of a gown, but a half-assed apron. He actually does two outfits, and puts the one that most people were criticizing, in a group think, on the runway. I'm not talking about confessional criticizing, but openly telling Fabio he's making a mistake. Still, he doesn't listen.

On the other hand, there are some interesting work arounds. Both Egg and Sonjia find fabrics where half of the work has already been done for them. Sonjia found a gorgeous edgy lace which doesn't look like the usual lace. It's a gorgeously constructed fabric with an intricate and unusual pattern cut into it. Egg finds a rhinestone fabric which glitters like the best of Broadway. It's a gorgeous fabric where you just have to put it into an interesting shape to make it look good.

Zanna comes around really early in the episode this week. In reality, she makes her appearance at 1:15pm on Day 2, which means that everybody has about half of a day to figure out how to make things better. This week, she's amazing. She has some great critiques. "Shower loofah." "Avoid every bone in your body." "Dullsville." "Get rid of anything that resembles crafty." Some people listen, and they're in the top.

The best comment of the episode goes to Dimitry, who criticizes the afore-mentioned Fabio group think. According to Dimitry, the gang spends 30 minutes hemming and hawwing over Fabio's gown, and Dimitry is like "how the hell do you have the time for this?" Which, really? Although, Chris March, one of the guys in the group think, once took a nap in his original season.

The only detriment to these early episodes is that, in 60 minutes, the editors don't have any time to craft stories. Egg got some time this episode. Helen, so far, hasn't started any drama. The closest to a villain is Dimitry being periodically bitchy and self-absorbed. But, you know what? I'm not rooting against anybody this season. I'm rooting for Chris, because I absolutely loved his final collection and am still bitter I didn't get to see that in motion on tv. I really love Fabio's design. Justin is still a really sympathetic character who has great ideas that don't seem to get fully drawn out. Jay and Sonjia are edgy and fantastic. I mean, some people have tastes I don't like (*ahem* Portland *ahem*), but I'm not rooting against anybody this year. That's actually refreshing.

Runway
This week, Georgina Chapman has been replaced by Betsey Johnson (can we keep her?). And, the main guest is Ariel Winters, from Modern Family.
The great dresses were generally up against really good dresses, and the bad dresses were up against other bad dresses. When Alyssa named the first three - Portland, Justin, Egg - I genuinely thought we were getting the losers of the group. Justin's is boring. Egg's is boring. Portland's is boring. But, then Sonjia was called, and I was like, "Wait, they thought Sonjia's was terrible? Maybe they didn't like the skirt too." Then, Benjamin and Dmitry. With Dmitry's being the only genuinely perfect outfit in the winners. Sonjia, Egg, and Dmitry are in the top. Chris, Fabio, and Helen are in the bottom.

Chris designed right into Betsey Johnson's wheelhouse, but she seems excited by how awful it is. In fact, she seems to be having fun with all of the designers. She calls Chris' "Wonderfully wickedly wrong." She tells Helen that she liked the dress because she thought it was a place to rest your drink, or your arm, and laughs. She also tells Egg that her outfit is boring, which it is.

That being said, the big toss up is between Helen and Chris. Helen's is a trainwreck from conception, but shows a lot of work. Chris is far more simplistic, and should have been able to at least shape the fishbone to the curves of a body. Chris went home because this was the second week in a row where his outfit was lazy and awful. While, Helen stays in.

Sonjia wins, but I still really don't get the dress wrap around.