Project Runway All Stars S4 E2: "The Art of Construction" 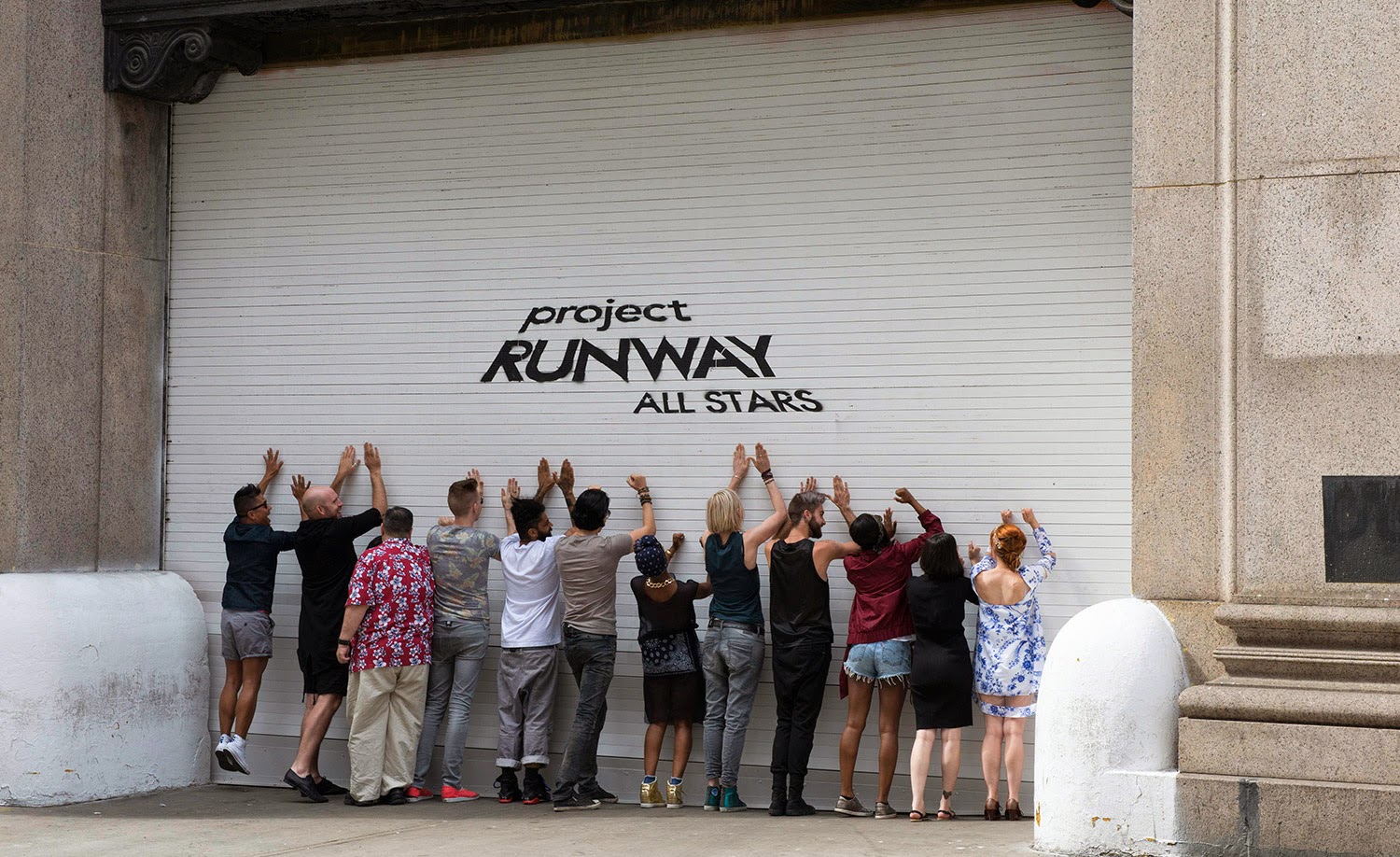 By the end of this episode, we will see some of the lowest moments of Project Runway. Lower than fawning over a Samsung refrigerator. This is right up there with Red Robin's remake an ugly suit challenge where we didn't even get to watch the designers run over and strip the models. And, yet, this season of All Stars is running almost like Bravo-era Project Runway.

This week is the much vaunted and feared Unconventional Challenge. We know its both vaunted and feared because Alyssa Milano tells us so, continuing Project Runway's running theme of celebrating themselves to the audience already watchingRO 2. Alyssa then runs through a bunch of previous unconventional challenges this year's All Stars had done, just in case you cared or forgot.

Construction is this week's theme, introduced by some B-roll of NYC construction workersRO 3. The construction site the designers are visiting is a warehouse stage used in Fashion week, with a bunch of construction site things sitting around, including a No Cell Phone sign and a couple of lumbersexual models wearing helmets and vests. Alyssa tells the designers they can strip the models, but then corrects herself that the can take the protective gear. So, no real taking of clothing. Dammit, Lifetime.

Today's goal is to make the "masculine" materials into the most "feminine" outfit possible. Thus bringing into question the gender construct reinforcement of Project Runway. Society has deemed that construction work is not feminine and that sexy, curve fitting, clothing is feminine. By reappropriating construction materials for a feminine outfit, one could easily argue that Lifetime and Project Runway are making a political statement about women just playing dressup in order to participate in masculine behaviors such as construction. Or, that women shouldn't play with boys things because femininity. Either way, we're getting the social binaries completely reinforced with this episode, and we didn't even see any naked mens.

The usual rush for materials that comes with the unconventional challenge comes with an opportunity for the producers to try to create drama, but what it really does is mark Alexandria as either winner or loser. Alexandria goes all aggressive, has her back story (Camp Couture) reaffirmed, and she says she's still bitter about her previous loss. Be wary of her bitterness and aggression going into her dress.

The actual drama comes from Chris March and Dimitry. Chris starts on making a rope halter top, when Dimitry works on a rope dress. Chris's halter is unflattering and unimaginative in its construction from the start, while Dimitry is creating swirls, cups, and accentuating the female form with his. Chris gets bitter and starts bitching about how Dimitry steals his look, but doesn't actually do anything about it.

As per the rules of the unconventional materials challenge, there is a fair amount of struggle in figuring out how to make the materials into fabric. There is a fair amount of trying to manipulate tarp as if they're using cotton (Jay, Alexandria), and also the usual hot gluing materials onto muslin. The most successful of the designers use the material to create an illusion of fabric, while the least successful are the ones who can't think outside of the fabric box.

Last week, I didn't get to note how much I love Zanna Roberts Rassi. Much like I think All Stars' judging is more honest and compelling than Original Flavor, but I am getting to love Rassi even more than Tim Gunn (though I still think that Joanna Coles, the Ice Princess, was a great mentor). Zanna comes in and rips apart outfits with single words. She tells Portland, "Doesn't that feel a bit...sporty?" By which she means, "off the rack." But, Portland hears "sporty" as "sporty" and ignores her. She also constantly drills the idea of "feminine" into the designers. Rassi hits a lot of the correct criticisms, but people don't listen. The big problem is that she doesn't finish her mentoring until 7:30 (see the clock over her shoulder), and they only work until 10. How can you change your direction if you don't get a second eye until most of the way into the day? I thought I remembered Coles being done with her mentoring by like 5:30, giving them half the day.

Soon enough it's runway. Here is the main problem with modern day Project Runway. The main guest judges are fucking Snooki and J-Woww, aka Jersey Shore. Their 15 minutes should have been up years ago, and their ratings are down, but Lifetime insists on foisting them upon us. In the meantime, the other guest judge (yes, there were three guest judges this week) was the always insightful Elie Tahari. Elie Tahari is given the back seat for the Jersey Shore judges. If this doesn't encapsulate the problems with Project Runway, I don't know what does.


The judging here isn't as trainwrecky as one would expect with the judges, but the fact that Elie gets a backseat in the editing really frustrates me. He generally has some great advice, but is edited down to primarily trying to say good things about the lowest rated designers. In the end, Alexandria goes home, in no small part due to her lack of creativity (using tarp as fabric and creating a boring dress with it...yawn.

In the end, Alexandria goes home, and Justin wins (for the first time!).