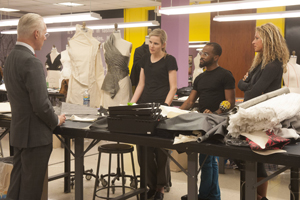 Sandro is still gone. The male designers are lamenting the absence of Angry Warrior Sandro, while Helen is still angry at herself him. But, really, I think all of the readers agree...Fuck him.  He's an anger management-needing conflicted stressball control freak.  To put it lightly, the boy had issues.

This season's Project Runway has really been maximized for heightened drama. We've had not one, but two unconventional materials challenges so far - Parachute and Coney Island toys - and, one team challenge where the most tempestuous combination possible was the last to be paired, leaving the audience to speculate that their buttons weren't even in the bag. Add Sandro losing it, and Drama Helen to the mix, and this has been a season mainly about dwama first, fashion second, and catty putdowns last.

Maybe, now with Sustainidiot and Freddy Merkovitch gone, we'll start to normalize this epis...HAHAHAHAHAHA!  Please.  We all know better than that.  Anyways, onwards and deeper into the tunnel we go.

First, obligatory product placement: Lexus. They're entire purpose of this challenge is to be the cab taking the designers to their material stores.

Second, we find out that it's a 3-person team challenge. Normalized attitudes? The producers mock your ideas, you simpleton.

Really, in terms of teams, it's a mixed bag of talent at the outset. Generally at least one decent designer is teamed with at least one terrible designer with a middling designer to balance. The only team I have hope for is London, Kate and Redheaded Drew Barrymore.

Third, the story of the task is to create a "high-end, luxurious mini-collection of three looks" that may or may not be inspired by this evening's product...um...oh, yeah Lexus.

Fourth, it is the third unconventional materials challenge, and the second team-based unconventional materials challenge. However, for the first time that I can remember, the teams get to choose the sources of these materials (choices: food market, party store, or antique wallpapers). And, also for the first time ever, I don't think that Project Runway mentioned that this was a first ever for Project Runway!  ZOMG.

To summarize: this week's maximal drama manipulations: Unconventional but high-end, team-based, and cohesive.

This week's trouble maker: ToKen. Ken seems to be outnumbered from the beginning, and it rubs him wrong. Rather than rolling with it, he's going to fight to have his voice be heard PEOPLE. Silence!  He's talking!  All of nine minutes into the episode, he says "I need a gun."  We heard that!

Upon reaching the workroom, ToKen immediately takes a note from two weeks ago's Megabitch vs Sustainidiot battle (ep 3: the first team-based unconventional episode, if you're keeping track), and starts bitching about his team in the sewing room. He says Sue can't sew and calls his other teammate, the generic blond girl who never gets any airtime, grandma while grousing that they don't listen to him.

Then we get all of 1 minute of design before we hit more dwama between ToKen and Sue, where ToKen takes up Sandro's role of dominating Sue, and Sue kowtows...AGAIN. But, based on the shitty $400 Squid dress she made last week, she may actually need to concede power.  Because, really?  That was awful.

But then...ZOMG, the Owl's back! Er...I mean Sandro's back to say goodbye and give some bullshit apology.  Tim offers up the bullshit explanation that this is so the designers can have some closure, or something.  Take note that Sandro gives his confessionals in a completely different shirt...again!

All of that dwama happened, and we're all of 23 minutes into this episode, including commercials, credits, and last week's recap. Which means, it's time for Tim Gunn Reviews!

Redhead Men and a Miranda made a fluffy dress out of something stuff. Tim approves.

London, Kate and RHDB, have created high end edgy and sleek garments out of placemats. And only placemats. Tim wants them to push their materials more.

Helen, Justin, and Dom have created what kind of looks like the pantsuit that Madeline Kahn wears in High Anxiety to match the wallpapered car. They only spent $600 of a $1500 suggested budget. And also a white bag dress. Tim is like "uh...what? No. Nonono. I can't help you."

ToKen, Sue, and generic blond #7 have created a bit not much. ToKen tries to assert. But one look they did was made out of a shower curtain and Tim's all "UNconventional materials challenge! This is not UNconventional!" Also, "Make it work." Then ToKen lets the dwama out in front of Tim.

And, we finally get to the design. Everybody's struggling as this is the first actually non-fabric unconventional materials challenge. Clothes are going wrong after the critique and people are getting lost. ToKen bitches, then says the one thing we've wanted him to say all episode even though he won't actually follow through: "I'm just gonna shut up right now."  He doesn't.

On Day Two, they're busy fixing everything, ToKen is losing it because Sue had to start from scratch after the Tim Gunn critique, and in the end, Sue doesn't finish and is pinning the dress together in the damn hallway after they leave the workroom, and Tim's pissed about that now.

Team 1:
Alexander (aka Pale Redhead): its not awful, but its like a walking disco angel. The Disco 70s have met the Art Deco 20s in this design, and its not terrible.

Team 1 summary: Cohesive and strong, and least where Alexander and Dance Beard are concerned. Miranda's is a snoozefest but she'll be carried through another episode.

Team 2:
Justin: Nice elements, but the eggshell top with the 70's faded orange brown on a pale red-toned girl all really keep the red goji berries from popping. It all collides for a boring mush mash intersection of muddled coloring and shapelessness.

Dom: It's a simple dress with new wave inspired shoulder embellishments. If it wasn't for those embellishments, it'd just be a boring dress out of a shitty pattern. The colors are awful still.

Team 2 summary: Some nice elements that are ultimately kept down by shitty color choices.

Team 3:
Sue: Disaster. Mishap mash of thrown together materials (that look nice together) but make a schizophrenic, unfinished, dress. I love the model's expression in the Project Runway official photo.

ToKen: It looks like a car model. I kind of like the material for the skirt, but the top loses me.

Alexandria: wut? Her dress is popping? I don't get it. But, it's a trash bag and some placemats.

RHDB: I kind of like the angled Mondrian esque front where everything is fractured but lineated.

Team 4 summary: Slick and sharp materials, decently executed, but not cohesive at all.

As predicted at the beginning, Team London was the winning team. And, as usual, a crappy collaboration makes a crappy collection: Team ToKen flops.

On stage, ToKen starts going after Sue, and Alexandria can't decide who was worse. Backstage, ToKen turns it up to ridiculous. "Don't even look at me!" Seriously, ToKen could be in the remake of Mahogany. I think he has a touch bit of Napoleon complex, but he manly reminds me of Hooper X in Chasing Amy. "Honey, don't give me that 'all for one' shit. I got to deal with being a minority in a minority of a minority, ain't nobody supportin my ass. Oooh, Yanni."  It's a tough world out there for gay black men, believe you me.

London wins (recognition finally!), and Sue's out. Which means we don't get to see her go completely into debt with $400 outfits. Damn.

Unlike Sandro, I actually have a bit more sympathy for ToKen. ToKen was being dominated by two his two teammates from the beginning. He may have made shit anyways, but getting ignored always sucks. At some point, if the ignoring continues, you have to make the decision to either go Sue and be seamstress or go ToKen and be aggro. The former loses your voice and the latter loses your team. Neither way is very good.

- Silver is a pop of color, but not to Nina Garcia, according to the pale redhead.

- Just because you meta-comment on the ridiculousness of your drama manipulations through the designers in confessionals doesn't make it OK!

- London's pseudo-vicious catty comment of the week: "I don't care what material it was made out of, it is a little costumey."

- Drama Helen "Maybe we shouldn't have done pants at all, it's just too conventional!"

- Justin's family is so sweet and quaintly Midwest.

- Token is wearing a fetish harness by way of German suspenders?

- Obligatory gay male perving: HMG, wear less clothing! You could do this show naked and I'd be happy.

- "I plan on not eating tonight to fit into this one! Hahahaha!" Anorexia is soooo funny!