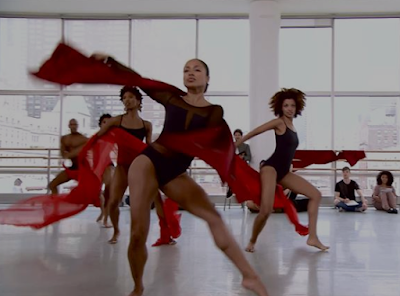 There is a big difference in a garment when it is moving on the body of the wearer, and when it is static on a dress form or in a photo. We've seen flowy pieces from the likes of Uli Herzner (in Season Three, especially) and the recent PR Juniors finalist Maya (last name not given on Lifetime's website, way to protect the kid's privacy!). Another everyday example of this is the trickery involved in almost every photo you see in catalogs. Wow, those shorts look flattering, the 36-year-old size 10 you thinks flipping through H&M's website while snacking on SunChips on your lunch break. No - the back of the actual model is most likely covered in alligator clips and temporary gathers, as the stylist tries to tailor an untailored outfit to the bony proportions of a 17 year old.

Those linen suits in which the friendly looking ladies frolic? Scratchy, uncomfortable to move in and if you don't see deep wrinkles near the hips and bust, the photos have been 'Shopped.

We will see the difference in a garment that walks, and looks breathtaking, and a dress that sags into potato shape, in an upcoming episode, but for now, everyone is going to channel their inner Margot Fonteyn and embrace movement, flow, scarves and capes, all assisted by a runway wind machine. It is a three-dimensional PR first, and an innovative idea. So who will screw this up?

To illustrate the concept, the designers are taken to the legendary Alvin Ailey American Dance Theater, when they get an eyeful of gorgeous dancers lifting, swaying and swirling. Then they get to sit on the no-doubt chalky floor to sketch, before a trip to Mood and a visit to aisles some, like heavy fabric-loving Emily and leather-afficionado Stella have clearly never visited before.

The concept across the workroom is very similar - make a somewhat standard dress, but add billowing sleeves, skirts, or neckpieces or modified capes. In doubt about billowability? There is an industrial fan to play with, in the lunch area, and possibly one in the makeup room, too-

Alexander doubles down on the cape idea and creates a virtual parachute, attached to a slinky/slutty lacy long dress. Sam is thinking of Marlene Dietrich driving away in a convertible, scarf blowing in the wind.  I kept thinking of Jayne Mansfield. Emily lets her printed purple chiffon dictate her design, making a simple muu-muu, but creating a braided rope of out of extra pieces to mimic the rope in the print. What goes under the sheer look? She'll figure that out later.

Fade makes a coppery sheath dress that doesn't look too great on its own, and then makes a... covering? semi-covering? Chiffon bibbed backpack? out of a contrasting zebra-looking fabric. Kini chooses the brightest yellow in the world and takes a big chance by dip-dying it into an yellow-orange-red ombre. As he notes in a confessional, one splash of dye onto the pristine yellow parts of his already-constructed gown, and he's screwed. Or pinning a cover up brooch onto an awkward place.


Zanna's critique of Stella's fringed faux cape as "not elegant" is met with the most beautiful response. Stella pauses, bites her tongue, and just snarls, "it's elegant, Zanna."


Guest Judge: a pre-Grease Live! Vanessa Hudgens, at least it's not mentioned in her intro, looking like she is pushing 40 and described as "sweet" by top-knotted and micro-shorted Alyssa Milano.

Kini's bright and moving "birds of paradise" gown, but the judges aren't too thrilled about its pale yellow lace top.


and the winner: Sam. It looked great moving, and if you can handle the optical lines, just as great as the model stood still. Very Great Gatsby.


Fade's mis-matched copper tight/loose black and white not indulging in the concept dress.

Alexander's 20 foot parachute train. that part they love, the Real Housewives tight see through cocktail dress underneath gets the head shake.

Emily, who created ugly see through shorts to go under her caftan, and has her model in a beige strapless bra that is clearly visible.


There will be more fashion opinion as we catch up, Runaways. Leave your thoughts below.

Posted by MediaGrrl at 7:00 PM