Project Runway All Stars S5 E01: "What Makes an All Star?" 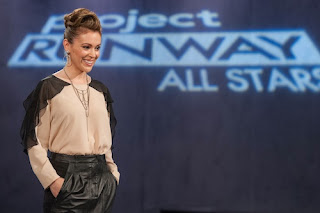 If a designer shows fall (collection) in the forest and no one is there to see it, does it make a sound? and is that sound the grumblings of Isaac Mizrahi?

Project Runway and their dubiously designated AllStars is back and we simply can't let them go about their tv designing business uncritiqued! Adrian and Julius are very, very busy at the mo,  so I, MediaGrrl Martina, shall try to jump in and get us all up to date. Thing is, I'm in the UK, so sometimes have a delay in accessing the (I assure you) extremely legal feeds from Lifetime's pink turreted Manhattan headquarters. Also I'm working over at www.PopCutureBeast.com , writing about film, music and tv, so, the day job calls. Please do check it out.

So a quick splash into the fashion pond. Returning players are:


Representing the short-lived "Under the Gunn" - how much Nick Verreos were we expected to endure, people? - are SAM (baby-faced, ironic sweaters) and ASHA  (Michelle Obama's curvy cousin. Also, BFFs with Sam? His words, not mine.)

Back to the Main Tent Acts.

Season 12's DOM (wait - she was that year's winner. What is she doing slumming it here, where did her hot hundred Gs go, and how adorable is she still?) joins not winners ALEXANDER (theatre guy, used to be ginger, now blonde, but still with the abbreviated eyebrows), and ANGRY KEN (he and Alexander almost came to blows in the Ironing Board Incident - hmmm, this could be interesting).

LAYANA (Bland Brazilian beauty, Season 11) is also back for more, as is VALERIE from Season 8 (her Mary Tyler Moore/Rachel Dratch combo now punked up with an ill-advised nose ring), and Season 5 rocker STELLA (say it with me - I do LEATHUH).

But completing the troupe, in sepia tones from way way back, we have DANIEL FRANCO, who's claim to fame is being kicked off of both Seasons 1 and 2, the only real double contestant in history, not matter how hard Amanda and Kate try to hang onto onscreen life at Parsons.

And that completes this Season's line up. Oh, except later in the show we get a glimpse of the real fan favorites:  SWATCH (hang in there little guy!) and HANDLEBAR MOUSTACHE GUY (a bit of candy for the boys). Both looking good.

Not much happens in the episode. The challenge is to represent the moment you knew you wanted to be a designer, a cool idea. Most of the looks are solid.  People-wise, Sam and Mitchell confess to hating each other (via an off-show, online snark fight), Daniel plays drama for the camera after he slices his finger, Fade talks about freedom, and Valerie not only has metal all over her face and ears, she has "bubble guts" (nerves?), but gets the win.

A double elimination should have been in order as Daniel fails at tailoring (that's his thing, he tells us) and can't even manage sleeves on his coat dress, and Mitchell barfs up a tulle monstrosity meant to show us his bad childhood.  However, a lovely, cheerful and well-padded Alyssa Milano, aided by Georgina, Isaac and guest judge Dmitry Sholkhov, give them both a second chance.


Boo! In a perfect word, and of course by that I mean in the Trump Regime, they would have been ejected, for creepiness alone, especially camera hog Daniel. Tailor, my ass.