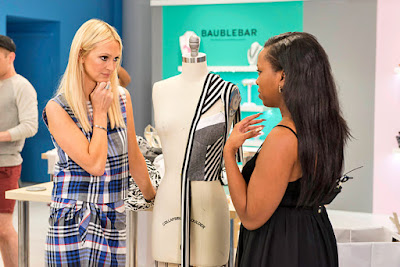 If you go back to the recap of the introductory episode of this season, you'll see that when doing the roll call of our designer buddies, I cheekily referred to Ken as Angry Ken. I could have go with Bowtie Chest Tat, or Mountie Hat Ken, but if you saw his original adventures on PR, you'll agree, Ken be pissed.
But so far this year, he has been ....dare I say pleasant, even when joining in the bitchery about Sam (I know that sounds contradictory but designers bitching and sniping is de rigueur; Ken's previous borderline violence was not). He and his former squabble partner Alexander seem to be getting along, and Ken is coming off a win for last week's gorgeous, regal, Bob Mackie-esque "baroque" gown.
This week, initially, the theme is possibly more clear to us at home on the couch (who am I kidding, for us sneaking a download at work) than the contestants. They are on their way to Mood before they know of the challenge, and are striding through Manhattan wondering what is up the sleeves of that crafty Production team.

But upon arriving, they are not pawned off on some underpaid PA, no, it is Alyssa Milano who is waiting for them, cheerfully marvelling at her surroundings. Seems Alyssa's never been to Mood. She enlists Ken to hand out envelopes to the gang, but there is no gamesmanship as the envelopes are unmarked. She then announces the theme is evening resort wear, and since fabric choice is so important, let's see how everyone does when that choice is taken away. Gentlemen, start your engines open your envelopes.
The group reactions range from a happy Ken who gets silk charmeuse, a happy Asha, who pulls Neoprene (that is a good thing?), a happy Layana who's given lightweight cotton (as opposed to heavy tarp cotton) and even a happy - hard to tell - Emily who will be working with denim.
Alex was initially feeling screwed as he got upholstery fabric (everyone groaned when he pulled that out of the envelope) but during the shop finds a sheer weird netting fabric with red, white and black heavy circles on it. Hard to describe, since I know you're thinking of a couch, but you'll get a visual below. The other dud is Kini, with brocade. An evening at the tiki bar in Barbados does not suggest brocade, darlings. Kini manages to find a selection of pale and somewhat thin fabrics, but does not feel hopeful. Everyone else seems to be relatively happy. Even Ken.

We viewers might have known the title of this episode was "Bait and Switch", and since there is not a fish to be seen, the accent's on the switch. Back in the workroom, beating the designers through traffic, is Ms. Milano. Guess what, she's never been there, either. Though she's happy to be where the magic happens, her presence causes more groans - this ain't good. She tells them since they "baited their hooks for fabric" - ouch - they will now all have to "switch". A Yankee Swap ensues.
First, Ken laughs, smiles, and takes Asha's Neoprene.
Just kidding - Ken is not amused. In a confessional that of course would have been filmed later, when he is more tired or the shit has sunken in, Ken tells us his pissed, and his eyes show it. It's very intense. He also complains about Asha's fabric not being flowy. Our sympathy slips away as we remember he could have chosen ANYTHING.


Back to the switcheroo.

Asha steals Dom’s jersey knit.Dom steals Valerie’s linen.Valerie steals Layana’s lightweight cotton.Layana takes Ken’s silk charmeuse.Emily takes Alexander’s upholstery.Alexander takes Emily’s denim.
That leaves rivals Sam and Kini to swap.Sam gets brocadeKini gets lace.
Sam says “it’s like getting coal under your Christmas tree,” and he has placed under Kini's tree the brightest most horrible blue lace I've seen outside of a comedy quincenera. Kini openly questions Sam's designer cred.
There was another questionable choice during the swap - why did Emily go for the upholstery fabric? Maybe because Alexander seemed at peace with his concept/lot in life - and I would love to have know what he was going to do with what he bought. We will never know, but we learn it involved only one yard of the solid red fabric that perhaps Alexander meant to go under the netting dotty stuff?
Emily fusses, frets, ditches the dots, tries to make the red cover a human body, somehow, and gets support from a lot of people, including Sam. But by critique time she is in tears. Quiet, cool, Emily tears.
Zanna is not impressed with what she sees from the gang, much like she hasn't been this entire season. This is ALL STARS, Zanna. Be impressed. You've gotten to see the likes of Daniel Franco working, so show some resp­ect. But ZRR says she sees too many samey jumpsuits and as she leaves says things are too middle of the road.
After model fittings, Sam begins struggling with his jumpsuit - yes, there are a lot of jumpsuits today - look and actively hates every bit of brocade Kini bought. Kini, dealing with toilet bowl blue lace that looks scratchy as hell, tells him to do something else. Sam stares at his fabric for a long time, a light goes on, and he decides to stop making brocade try to bend into a slim one piecer, and make a gown.

Guest judge is smiley Broadway star Megan Hilty.  She's lovely, but with her opinions added in, we get one of the most confusing judging sessions of the year.
Safe: Kini, who worked a litle magic with what he was given, Alexander, who made a lovely loose halter-necked gown out of the denim, and Asha, who should have been up top for her gorgeous almost Art Deco trimmed cotton jumpsuit, are all in the middle.
Top:  Ken who has chilled out a bit and stands by his mermaid, poufy bright orange Neoprene gown that to me says ESPYs. He confesses he didn't know WHAT to do with it at first (again, he had first choice) but he loves it. So does Isaac. Georgina feels the drape-on top is too heavy, Megan would “die to wear it.”
Dom's look is so striking. She took Valerie's brightly colored linen,made her own striped textile, and paired it with white. They mostly love it, though Alyssa thinks "beach umbrella".The judges are split, it seems on everything else. Oh, but she wins, Dom does, and Megan Hilty will wear it, without dying, at a Broadway event.

Hard to say bottoms this week, as Alyssa and the others at the same time love Sam's gown, but find it, in the words of the late lamented Michael Kors, "Becky Home-Eccy".

They have a million problems with Emily's weird combo that doesn't seem resort unless your holiday takes place in the Ukraine.

Valerie's orange jumpsuit is superlowcut, fits well, and is styled with a turban no one seems to mind. They all kind of like it and say it is very Valerie, and she has been in the top all season, so that must be good.
Layana's Ken's color choice is gorgeous but can run "old", the fearsome foursome say, but she manages to make it youthful, the charmeuse moves well, and they love the sexy back. Isaac and Megan do bring up a bias cutting issue near the boobs. Alyssa chimes in that one must be flatchested to wear that, and notes that she is not. No kidding, her rack is impressive this week.
So after back and forth and odd debates: Valerie is out.
I haven't been this surprised with a PR result in ages. I thought Valerie was a strong contender.

Posted by MediaGrrl at 7:24 PM