Oh what a big week for building drama.

When immunity is not an option, the Producers like to give a little perk to the previous week's winner, and this time it was Sam who gained a big advantage.

In this third week of Project Runway All Stars, Season 5, Alyssa introduced the designers to her "friends", country band Little Big Town. Bullshit I'm sure, but Alyssa is so lovely that, well, maybe they are really buds...? Each of the band's four members appeared on the runway to promote their latest record explain their style, but it is the two female members of the group, Karen Fairchild and Kimberly Schlapman, that will be dressed this week, for, wanna hear what we're playing for, Survivors? a future appearance at the CMAs.

The designers were paired up to create red-carpet looks incorporating the idea that "opposites attract." No button bag needed to make the twosomes - Sam's perk was to select the duos.

It is always interesting, when these people have to choose, do they go with personality-matches, or design compatibility, or talent?

Sam quickly chose to work with Kini, who seems nice, is talented and can sew, sew, sew. Asha and Alexander were put together, Layana and Emily and Dom and Ken were pleased to go sit next to each other as well. Sam then looked around, reveling in his power, and paired Valerie and Stella. Not so happy, those two. Last, Daniel and Sam's enemy Mitchell were paired. Daniel described it as "the worst pairing [he] could have possibly imagined." Sure, Daniel, I'm sure Mitchell is thrilled as well. Sam seemed to be setting up Mitchell to fail, but couldn't even fall on the excuse of "I was told the theme was opposites attract". Daniel and Mitchell have put such unfinished dreck down the runway, it would be hard to claim they weren't two peas in a frayed, tacky pod.

In the workroom, storms were a'brewin' opposites were not attracting. Daniel and Mitchell were squabbling over control: Daniel was too in charge as far as Mitchell was concerned. Daniel has time management issues, and should never be in control of anything. Mitchell needed take a “15-minute breather,” to get away from the posturing Daniel, so he goes to get a pep talk from his buddy, Stella. Stella? She tells him to just ignore Daniel, which is what she would like to do - in fact, is doing, with her own collaborator, Valerie.

In fact, Valerie and Stella were unable to fit their models without fighting, Valerie is trying to keep Stella on schedule, offers to make a belt for her and for her troubles gets snapped at and called annoying. 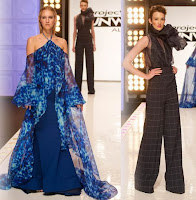 Boston vs the Beach is what Kini and Sam are creating. Bostonian Sam is getting along well with his self-chosen partner, so much so that he starts leaning on Hawaiian Kini, who has raced through his own flowy gown, for a lot of advice, then tweaks, and then actual construction help for his trousers. Kini not happy.

Karen and Kimberly are the guest judges, of course. They like Valerie's white jumpsuit but think it's not flashy enough, and like Stella's strapless corseted dress with an asymmetrical knee-length skirt, but hate that she used - let's all say it together: PLEATHER. What? Not leathuh, leather? Yes, for real, Stella used a man-made one-sided shite that looks like vinyl. Its only chance of looking good on the exposed part of the bi-level skirt was to have been lined. It's a weird mistake.

Layana and Emily, Dom and Ken, all safe.

Kini and Sam get high marks. Kini's bright blue quasi-cape over fitted gown walks beautifully - like the last challenge, this flutters and drapes as the model walks. However, when she stands still, the outer layer hangs and obscures her figure. Alyssa loves Sam's sleeveless exaggerated pussybow blouse with plaid trousers and calls them some of the best she's seen on the runway. Sam giggles and thanks her while Kini stews next to him. He exchanges a look with Alexander, who is also out there because... 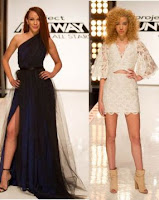 yes, Alexander and Asha. Both light/dark and long/short, this is a nice combo. Alexander loved this challenge and created a glam long tulle over silk look. Asha's went with short white lace that she said had an unlying layer of sequins - hard to tell on tv, but apparently there was an appropriate bit of sparkle peeking though on the runway. Karen and Kimberly loved them both, but as the models were styled to look like the ladies, a little, it's easy to see curlytopped Kimberly in the white, and dark dramatic Karen in the longer gown.


Bottom:  Daniel's and Mitchell's concept was "pleasure and pain" but looked more like Craft Store and Fishing Net. Neither were meant for the red carpet, tough Mitchell's came closer, maybe? Neither looked like an adult had made it, at least an adult with opposing thumbs. One of the judges said they actually liked the feathers on the bodice of Mitchell's drapes gone wrong look, but actually it looked like an accident in a chicken coop. Since they had been saved together, week one, I'd have dropped them both in the grease this week, but it is Daniel who is shocked, real or fake, he is visibly surprised, and sent home.
Posted by MediaGrrl at 8:29 AM