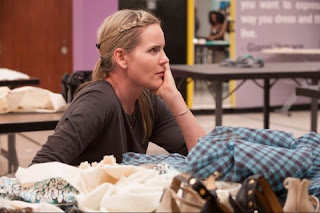 OK guys, I'm lost in this episode.  The only times I ever went south of the Mason Dixon Line were when I visited my grandma in Florida as a high school teenager.  Everything I know about southern fashion I learned while watching Real Housewives of Atlanta, or Bad Boys II, which let's face it, probably is more-than-slightly skewed.  I just want to be up front about this because the judges' decisions for the top three completely baffled me.  But, I'm getting ahead of myself...

We first go to a Southern hipster restaurant in Portland Atlanta Williamsburg for a "southern-style" brunch.  Nothing says "southern" like being surrounded by gigantic prints of French art with ivy climbing all over the wall, and a restaurant called "Juliette." Its that neo-European-chateau style that has become popularized as promoting naturalistic old world charm.  So, it's just like being in the deep south with a modern woman, right?  At least they'll have mimosas, maybe?

Anyways, this is the Accessory Wall challenge, by which I mean Belk, which actually is a department store and not just an online retailer.  Huh.  The closest I have been to a Belk department store was when I drove through Missouri.  I said I'm going to have a problem with this challenge!  The challenge is to style for the modern southern woman, who is the common Belk customer.  My first thought was "airy with brightly colored prints that is loud or brassy and could possibly be tacky."  Tim's description, "She dresses vibrantly and expressively, and she is always fashionably put together.  She knows how to use accessories and she loves color, and anything with feminine details."  Dom and ToKen are from the south.  This location-based over-confidence is almost always the kiss of death, and always leads to the designer going for too respectful to avoid stereotypes or a design intended for their mother.

The designers then have to sketch and design for a modern southern woman while sitting in an old-world styled restaurant surrounded by French art in the middle of Hipsterville, NY.  Then they go to mood, where three designers choose plaid.  I don't quite know what could have possessed them to think of plaid.  Not in Hipsterville, NY.  Nope.  No idea.  And, then Kate chooses a fabric that looks like the 60s puked on a dress. Maybe up close it looks better, but on TV it looked like somebody sewed some weird Magic Eye stereogram pattern periodically on a hideous orange and then surrounded those patches with 2-dimensional dingle balls.  It's hideous. Helen has also been taken over by the 60s by choosing a yellow fabric, and a flower cut lace.  On the other side, Dom picks out this amazing black and white zebra-esque print that screams southern modern to me.

In the design room, the designers hear the designs will be made and sold by Belk.  This causes Alexandria to panic. Again. And, she designs something...um...what the fuck is that first print that she uses?  It's like this Navajo inspired pattern had sex with a houndstooth pattern, and then one of the competitors was jealous and poured bleach all over it.  Tim Gunn: "Hideous."

Also, Dom has a crisis moment thinking she's always been "safe" and needs to go "minimal."  By "minimal" she means "simplistic."  Dom, let me be honest with you.  Minimal is not "under-designed."  The yellow dress that Helen made, then subsequently ruined, with the flower print?  That's minimal.  It has shape without being structure or overt.  If you want to go minimal, think about what minimal means rather than under-designing it.  And, you can do a minimal dress in a pattern.  So, don't eschew your oh-so-southern pattern.  But, she does anyways.

The rest of the design time flies by, including the second day...and suddenly its Runway time.  And, we're only 40 minutes into this episode!  If you've watched the preview, you know why it is wrapping up early this week.  If not...you'll just have to wait. Our special guests are some chick host of some Lifetime

ToKen: A pageant-y, bridesmaids-y dress whose only innovation is the razorstrip back.  It really is not terrible. It is just soooo...booooorring.  SNOOOOZZZZEEEE.  You've made an every dress in a plum fabric. Congratulations.  How very modern southern of you.  Bottom three.

Helen: A sunny yellow tea-time dress with flower lace on it.  Its pretty.  It's a bit too long for its pattern.  It should be just above knee length and then it would be a great brunch dress.  The effect is like a modern version of those drinking glasses your grandmother used to have that were yellow with raised daisies on it that always got chipped. Alternately, the color and lace combo is young, and the lace is nicely patterned.  But, it's still modern retro.  Safe.

Justin: Its an orange brunch dress.  Its nicely draped.  The color is right on the money for its length.  It is. Safe.

Red Eyebrows: The first of the plaid trio.  I absolutely love this print.  This print is an edgy, young, gorgeous take on plaid that nobody else chose. And then Eyebrows turned it into an easy, messy, tablecloth-y dress.  There are sharp corners to the hem, and it flows nicely.  It has a wicked sense of humor, and I kind of like it despite its messiness. Top Three.

Alexandria: The second of the plaid trio.  I think I have a couple overshirts in this pattern.  I live in the Hipsterville of Seattle, you can all screw off with your judgments.  It's a boring fucking dress with a boring fucking print in dull wintery Northwestern colors. It's mis-shapen, too transparent, and ugly.  Safe (though I don't know why).

Dance Beard: The third of the plaid trio.  Hey!  I think I had a shirt in this print once before as well!  Its a better print than Alexandria's.  I really don't get this dress at all.  The top has mismatched panels, intentionally so.  The pattern doesn't match the bottom.  He has a flat board of fabric in several panels going down the front. And it hung flat on the body.  While the back billowed out.  I was really confused by this dress.  Apparently it was the "clear winner."

Dom: Honey, that is not a minimal dress.  For one, you have two fabrics competing with each other.  Especially at the shoulders, which are flared our with curls?  It's in a heavy looking solid fabric (which, to me, screams north).  And then with a slit in the dress, and a deep neck with three dart lines. And, from the back it is even more pageant-y with a full back and floor length skirt. No.  This was not "minimal." This was over-designed to try to look under-designed.  Maybe this is for your mom...but I couldn't see a modern woman in it. Bottom Three

Jeremy: I think you designed for Peach.  No, really, with the glasses and the hair, you styled it up for Peach. And I thought she used tgo have a penchant for jackets.  The floral print is kind of OK.  But, overall, you just went madame.  Your instincts are for older women.  That is not appreciated by the judges. Bottom Three

Kate: What. The. Fuck. I really don't get this dress.  At all.  No, at all.  The heavy shoulders. The colors. The print. The dingle balls. She minimized the Magic Eye stereogram portions to just touch the bottom of the dress, but the rest of it, I don't get at all.  It's eye-searingly ugly, and it looks like it it came out of some crazy designer's idea of the '60s. Top Three.

The judging was really kind this week.  Ken was bitter about plaid being loved this week.  And, his glares at Heidi were not unnoticed.  He was repressing so hard.  I wanted him to scream and pitch a fit about how no southern woman would wear plaid (as he's been railing on since the beginning of the episode).  But, he didn't. The other fun part was Heidi's disgust with Kate's dress.  I agree with her.  The best question she had about Kate's dress was to the Belk merchandiser "You think that somebody would actually buy this?!" EXACTLY!!

This week, we get a special treat, since everybody sucked this week.  We get the bottom three designers sent back to the work room to get one hour with an assistant designer to either modify their designs or create a whole new look.  So, runway looks again:

ToKen: So, you cut the dress to hoochie length and added a shoulder drape.  Oddly it kind of works, but he should have cut off the razorback.

Dom: She makes the dress everybody wanted in the first place.  It's hard to be harsh given what she did in 60 minutes.  The left boob is weirdly malformed.  But, the asymmetry is fascinating, the print is gorgeous, and the back is amazing.  She becomes second winner.

Jeremy: New dress. Its summery, with an interesting mix of prints...but in the most usual of construction. He loses.

So, Jeremy goes home for going to his older instincts.  Adrian would probably argue that because Jeremy can't pull himself out of his old lady mumsie instincts, he deserved to go home.  I argue that I think he has enough skill that he should have been saved here.

- More things Captain Sassypants doesn't do: "Think about the Southern woman." and "Pay attention to anybody else in the South."

- Another thing Captain Sasspants doesn't do: Answer any questions that other designers ask of him.  Hypocritical bitch.

- Dear HMG, I'm not a big fan of that fade you've got going on the sides of your moustache/beard.  It's kind of messy, but I dunno if I could take it seriously in "play time."  Then, again, I'm starting to suspect you're not a D, in which case I could trim it for you.  *evil laugh*

- "Out of the two of us, I think the right person went home, which was Jeremy." - Humble parting words from Captain Sassypants

- If you want further proof that some of the "confessionals" are recorded much later, check out the hot haircut Jeremy has in his goodbye confessional.

- Next week is the dreaded/expected "real woman" challenge.
Posted by Julius Kassendorf at 12:14 AM